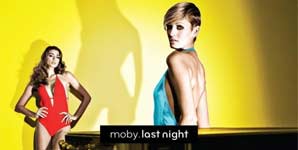 Success impacts on performers in a number of different ways. For Moby, the ten million copies sold of Play - achieved partially by the allegedly ambiguous ubiquity of it's licensing - prompted several years in which the man who once released an all punk album called Animal Rights fell into the bourgeois trap of being more famous for socialising than making music. Now 42, teetotal and more frequently referred to as a veteran than he'd prefer, Last Night arrives with the high concept of soundtracking a timeless Manhattan night out, attempting to flit between the styles that made earlier work such as Everything Is Wrong both more carefree and dance floor ready.

At the beginning the results are undoubtedly rejuvenating for both artist and audience. Opener Ooh Yeah revels in it's lo tech authenticity and recalls ‘e’ toting crossover act The Shamen, I Love To Move In Here is a truly gorgeous slice of nascent house magic and as the title suggests Everyday It's Like 1989 is so rave it might as well be a baby's dummy. We are indeed having it. Old habits it would then appear however to die hard, as both Live For Tomorrow and the syncopated hip-hop of Alice would have nestled snugly into Play's sanitised genre tourism. Worse still, much of the rest is subsumed into a gentle but placid sense of ambient nothingness with the tempo slowing to chill out room pre-dawns, although at least the rippling Sweet Apocalypse serves as a reminder that the Aphex Twin's stunning Selected Ambient Works has just been re-issued.

If Last Night is to be judged on following it's principle, then Moby is a very strange tour guide indeed, rushing the listener straight to the club and then having them in a cab way before bedtime. But the issue here isn't just odd sequencing; any sense of nostalgia generated misses the point. One listen to compilations of the early 90's most hedonistic moments reveals a different truth in the inevitable unevenness, bleeping idiosyncrasies and a lack of sheen which were their strength, produced as they were by largely faceless auteurs. It should also not be ignored that much of this Diaspora was specifically designed to work best in the context of a warehouse sound system and to complement the physical effects of exaggerated levels of dopamine, serotonin and adrenalin. It is for this reason most tellingly that the more the obvious retro elements attempt to communicate a sense of history, the more they sound counterfeit. Loving an era's soundtrack and updating it isn't impossible, as records by Metro Area and more recently Hercules and Love Affair have proven, but to do likewise needs a display of greater conviction than this.