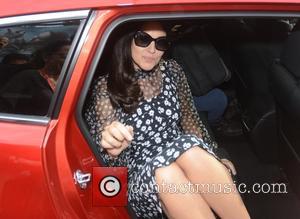 She announced her separation from the French actor in August, 2013, ending the couple's 14-year marriage, and the new James Bond beauty is deeply appreciative of her current romantic status.

Despite the heartache of such a significant break-up, Bellucci loves life as a single woman, telling British newspaper the Daily Mirror, "It's something I'd really never experienced before. I feel very alive. The single woman is a free woman, and being single does not mean being alone - it means being free to have a relationship or not.

"This can be scary, but it's also very interesting. Remember it's not that long ago that women only existed in terms of their relationships to men."

Monica stars in the new 007 film Spectre, opposite Daniel Craig, and in the movie she takes on the groundbreaking role of femme fatale character Lucia Sciarra, the oldest Bond girl in history.

Monica is proud of the part because she believes it's about time society addresses misgivings surrounding age and courting.

"We should not be worried about age when it comes to love and attraction," she said. "Just as younger women are attracted to older men, it shouldn't be considered strange that men in their 20s and 30s are drawn to older women. It's the chemistry and energy between men and women that counts... True sexiness is in the mind, the imagination, not in the age of the body."

Monica Bellucci: Sexiness is in the mind

Monica Bellucci: Being faithful is difficult

Monica Bellucci: 'I'm a Bond woman not a Bond girl'

Monica Bellucci thought she was M

Monica Bellucci: I never go to the gym

Monica Bellucci wants to be a 'Bond lady'