I remember a girlfriend of a long, long time ago tell me - when she was breaking up with me - that one of the male gender's biggest shortcomings is that they are blighted by being 'visual creatures'. In retrospect, she was probably right and it's a theory that Londoner Ned Younger, aka Monument Valley, goes some way to validating on Tongues, an EP which is thematically based on imagery taken from old photos picked up at car boot sales and open air markets. 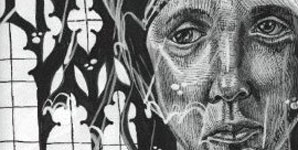 At a superficial level, this premise is something of a flimsy one but after listening it emerges that Younger clearly has an evocative way with words. The EP itself splits into two halves: the first being a pair of more esoteric offerings, with the latter being more character based. Opener Round and Round finds him backed by wistfully delicate guitar arpeggios and at times almost whispering words, in which he claims 'are about trying to work out how to live a life.' Decade of Divas, by contrast, finds him in the company of a lugubrious string section, although the gorgeous, delicate melodies they create are almost too uplifting, underlining the impression that in this diligent treatment of the song as a crucible, it's writer is a man strangely out of time.

Complementing this air of melancholy and at times, the almost skeletal arrangements, Younger's voice also has an air of fragility and on the second pairing, the refusal to stretch its boundaries is possibly the most intelligent thing about a release cloaked with introspection. Valentine's Letter Part 2 is an ode to love and dysfunction; Dear John Letters is a remarkably adept, virtually acapella rendering of a tale of two women who leave their respective partners for a life together. It also touches on the mundanity of long term relationships, be they gay or straight. Unconventional, original but at times, understated to the point of detachment, Tongues will reward those listeners who arrive with both patience and perspective.