It was much too much of an early morning for sleepy Morgan Freeman who couldn't keep his eyes open during a FOX interview. 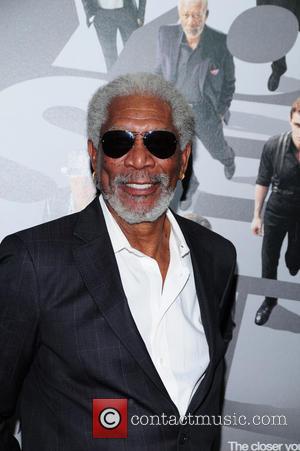 Morgan Freeman struggled to stay awake during a live television interview with Michael Caine on a Fox breakfast show while they were quizzed about their new movie 'Now You See Me'.

The poor Oscar-winning movie veteran, who's currently approaching his 76th birthday, fought to stay conscious as he rested his eyes while his co-star talked about the new magic flick. He is seen blinking a few times as his head begins to nod before snapping his eyes open again and attempting to focus. However, after a clip from the movie is played while Caine talks about the illusions, Freeman's chin is resting on his chest in what looks like a deepening slumber. Determined as he is, though, he manages to shake himself awake before the snoring began.

Neither Caine nor the FOX affiliate Q13 presenters seemed to notice at the time though, or, if they did, decided to ignore the slightly awkward situation anyway. Freeman later told People.com, 'I wasn't actually sleeping. I'm a beta tester for Google Eyelids. I was merely updating my Facebook page', while Fox noted on its website, 'Maybe he was up too late partying.' Still, at least it wasn't a solo interview; that might not have been as easy to brush off. Poor Old Morgan Freeman Nodded Off During A Recent Interview