Review of Body of Years Single by Mother Mother

It isn't even a real country anyway! Sigh... etc. America's supposedly squarer cousin (actually just nicer and less shooty) really has invaded. But not in the style of Canadian Bacon, no, but since Arcade Fire we have had the pick of the litter from our commonwealth neighbours.

Mother Mother are the more radio friendly offerings from Vancouver, in the same bubblegum guitar-pop enclosure as Metric. They've had minimal inches of column in the music press, meaning I have no prior impressions of them or their music until this very moment.

They have a staccato style, with harmonies and vocals piled up on top. This should be thrilling, but unfortunately, for pop music, they lack that certain bite that would make them irresistible. Body of Years is neither here nor there - the rhythm is too plodding and the sentiment too weak.

'Touch Up' too, makes a false start. The subject of make-up is always a good basis for a pop song. The last 30 seconds or so are good, but it's then and only then Mother Mother achieve the knowing twist and slide of their New-Wave influences.

So it's a case of could do better for Mother Mother, who are distinctly lacking in hooks this time around. 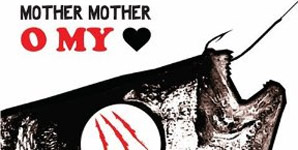