Jack Johnson has stood in for the Brits after they pulled out of their final few performances of the summer, rather than find a replacement. 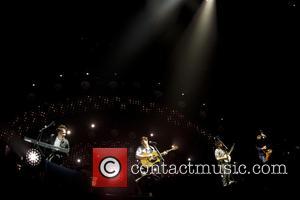 Popular alt-folk pansies Mumford And Sons had kept their fan's hopes up that they would be able to perform their headlining set at this year's Bonnaroo despite the recent news that bassist Ted Dwane has had to receive treatment this week for a blood clot on his brain. On the day before the performance though (June 14) the band decided, with a heavy heart, that they couldn't go ahead with the performance with Ted in his current state and the band have had to pull out of their scheduled performance.

The band took to their Facebook page to say that their 'Summer Stampede Tour' has come to a premature end, announcing the cancellation of the weekend set and two other sets the band were supposed to perform at before the summer is over. The statement from the band began on a positive note, saying that Ted had been discharged from the hospital and was well on his way to recovery, however the tone of the statement soon shifted as the band announced their plans to pull out of the planned performances at Bonnaroo, as well as Telluride Festival and a solo show at the Cricket Wireless Amphitheater in Bonner Springs, Kansas, rather than simply find a replacement bassist.

The statement went on to read, after detailing the decision to drop out of the planned shows and tell fans that Ted is getting better; "On behalf of Ted, and all of us really, we would like to thank every one for their compassion and support at this time and we are very excited to get back out on tour as soon as we can."

The Grammy-winners' decision to walk out on their Bonnaroo set rather than find a replacement has left the festival organisers in a bit of a pickle, leaving them with very little time to find a replacement act. Fortunately though, Jack Johnson has stepped in to help out the festival and will now serve as Saturday's (June 15) headlining act. Paul McCartney headlined Friday's main stage, whilst the Sunday slot is being taken up by Tom Petty & the Heartbreakers. Dwane is said to be in recovery at the moment Jack Johnson has stood in for the Brits