Ted Dwayne, bassist with folk band Mumford & Sons, is on the mend after he underwent surgery to remove a blood clot from the surface of his brain. 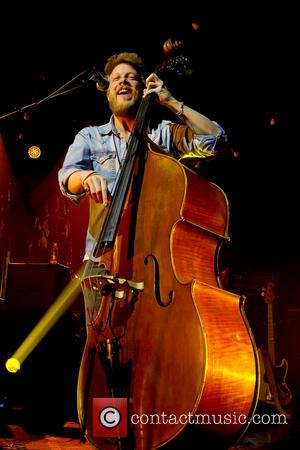 After being hospitalised with a blood clot on his brain that required immediate surgery, bassist Ted Dwayne posted a message on the band's website on Monday (17th June), reassuring fans and thanking them for their support under the headline 'A Message From Ted', reading "Bear with a sore head! Thanks so much for all the well wishing, it seems to be working! I'm home. Ted xx"

Mumford & Sons have been forced to cancel several US performances as a result of Ted's condition: "It is with sadness that we have to announce the cancellation of our scheduled performances at both Bonnaroo and Telluride Festivals, and our show at Cricket Wireless Amphitheater in Bonner Springs, KS.", due to medical advice stating that Ted needs time to recover before the quartet hit the road again.

US acoustic singer, Jack Johnson had stepped in to take their place at Tennessee's Bonnaroo festival.

An accompanying Instagram photo shows the newly-bald, bearded bassist looking relaxed, yet with a huge surgical scar on his head.

A msg from Ted: "Bear with a sore head! Thanks so much for all the well wishing it seems to.." http://t.co/YqdbnKDaYD rel=nofollow pic.twitter.com/do02LIRYAv rel=nofollow

Despite the scare, the surgery was deemed a success with Dwayne expected to make a full recovery. In the face of the loss of their bassist and friend, the rest of the group still managed to remain upbeat, joking "He has been nothing short of heroic in how he has handled the whole ordeal, and now it has been medically proved that he does indeed have a brain."

The Grammy-winning four-piece have a headline slot at Glastonbury Festival lined up for the end of June but the band and their fans 'Will Wait' patiently for brave 'Little Lion Man' Dwayne to recuperate before they are able to once again head out on tour with their banjos, double basses, and guitars.