Review of Drones Album by Muse

Whilst they remain undoubtedly one of rock's premier outfits, for some Muse hit something of a plateau with 'The 2nd Law', their sixth record released in 2012. There has been talk of a back to basics approach for album seven, 'Drones', which will see the trio kick off with many dates on the festival circuit before presumably returning to their own brilliantly ambitious headline shows. 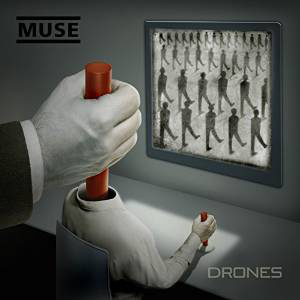 Instead of opening with an in-your-face number, 'Dead Inside' is actually a brooding number built around the rhythm section of the band, with Matt Bellamy sounding as impassioned as he ever has.'Psycho' moves from grinding riffs into howling guitar work, and is sure to please those who enjoy a big chorus, while the endearing 'Mercy' is how you would expect Coldplay to sound if they went into heavier territory. For those who enjoy imitating Bellamy's guitar playing, 'Reapers' will surely find favour with some nimble work both in the hook and solo, while 'The Handler' is brutally crushing alt-rock. 'Defector' falls along similar lines while utilising a group vocal style that Queen were so brilliant at, while 'Revolt' blasts our power chords before completely changing tempo with a chorus that actually has a great deal of pop to it. No strangers to orchestral sounds, the trio turn to this on 'Aftermath', a beautiful track, before unleashing 'The Globalist'. A ten minute progressive monster, it wonderfully encompasses the different sides to Muse and for any other band would be a career-defining magnum opus.

What has been described as a concept album - the journey of a lost human being recruited and controlled - should probably end at this point, but the finale is a serene a cappella piece. Whilst the narrative is clear, particularly in the first part of the record, there are also times where the emotion is more personal - think of someone describing the situation of a friend, when it is clear they are talking of themselves. Sonically there is much more focus on guitars and the rhythm section, though of course synthesised components are not done away with altogether, but this record will dispel any suspicion that the Teignmouth outfit have lost their mojo. Instead it is an undeniable reinforcement that these are three of the most talented musicians in popular music and that, it would seem, they can make brilliant music at will.