The Week in Music featuring: Olympic Closing Ceremony, The Who, Blur, Chuck D, The View, Jessie Ware and much more!

Music in the news... After months of speculation, the lid was finally lifted on the Olympic closing ceremony, with a veritable feast of UK music stars past and present bringing the 17 day sporting event to a close. Among the most notable names of a star-studded extravaganza included George Michael, playing his first gig in a year, Muse, Ray Davies, One Direction, a reformed Spice Girls and Take That, led by an emotional Gary Barlow. The whole thing was brought to a close by The Who. 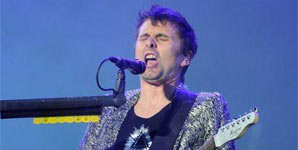 Keeping with the Olympics, the stadium's closing bash wasn't the only party in town last night (August 12th.) Across in the West End of London, in Hyde Park, Blur were playing what might be their last ever show. And how much did they get paid to deliver a near two hour set that mined the depths of their 22 year-old back catalogue? A measly $480, according to front man, Damon Albarn. "But" he said "that's not why you agree to do it." Good job too.

The world loves rap megastars Jay Z and Kanye West, well, apart from Chuck D that is. The veteran Public Enemy man has questioned who the pair are really doing their music for, other than themselves. ''Hip-hop celebrates those that want to make a killing, instead of those that can make a living" D commented, pointing out that the money making was taking priority over their art.

Record labels - they're a fickle bunch, aren't they? That's what Alex Clare must've thought after he was signed and then dropped by Island, after his debut LP for them charted at a mere 156 in the UK charts. What must he be thinking now, then, given they've come crawling back in the wake of his single, 'Too Close', becoming a slow burning hit? Unsurprisingly, he seems pretty cool with it, and has happily signed up to them again. What's that they say about how you should never go back.?


This week's videos...It's always a great moment when you hear that track that signifies a band's coming of age. Excellent, then, to report that Leeds' noiseniks Eagulls have reached such a point with their song 'Moulting,' off their recent self-titled EP. Describing the track, their front man George Mitchell comments that it "reflects my feelings of how I felt I had nothing left. I wrote most of the song in my freezing cold bedroom which is the size of a single bed. I would wake up wet from the damp all night and my feet would be covered in mould off the walls. It felt like I was dropping to bits like a cat loses its hair or a snake sheds its skin." It's a vivid description for a track that bristles with a similarly gritty energy.

Going even further north, we come to Scottish rockers The View, who trade in their youthful carnage for an attempt at something more reflective and mature. 'The Clock's title alone suggests a band wearily watching old father time march ever closer towards them. Chin up lads! You're not out of your 20s yet! You've got the lazy MOR part of your career still to come! The single comes out on August 27th, with its preceding album, 'Cheeky For A Reason', already available on Cooking Vinyl.

They're called The 1975, their logo's style is ridiculously similar to the old Factory Records one, and they name drop influences that include Joy Division and New Order. That's right, they're from Manchester, folks, and we've no doubt they were down the front at the Stone Roses' Heaton Park shows a few weeks ago. However, 'The City' doesn't quite fall fully amongst these touchstones, possessing a far poppier sheen to its sound. The video, though, is full-on homage; shot in black and white and filmed in an old industrial building, you can count on these guys being at the front of the queue when a time machine's eventually invented to get back to the late 70s.

Smiler may well be in a happy mood; if his single 'Top Of The World's' anything to go by, then he's doing rather well for himself indeed. The south London rapper and producer first came to fame recording 'Splender' with Lana Del Rey, and he moves on to new collaborators on this effort, Professor Green and vocalist Tawiah joining him. The two lads look pretty snazzily dressed in the video, but Tawiah's oversized shirt makes her look like she's just stepped out of an A level art class; we'll let her off, though, as it's her vocals that are the undoubted high point of the track. Albums of the week...
Los Angeles-based four-piece Saint Motel impressed our reviewer with their big guitar riffs, lyrical touches of humour and the carefully orchestrated concept of their debut LP, Voyage. The band initially formed after meeting at film school, and clearly their eye for the cinematic extends as far as their image evoking music. We wrote "Voyeur. [is] certainly worth persevering with, as it holds up well to repeated listens and doesn't lose any of its urgency."

We here at Contact Music towers have been touting Jessie Ware as the next big thing for months now, and so it's with more than a little forehead dabbing relief that we can report the London-based songwriter fully delivers on her debut LP, Devotion. A relatively late bloomer to the music industry at 26, Ware's years spent honing her craft have clearly paid off and, following collaborations with the Jack Penate and SBRTRKT, this is a bold, confident fledgling solo endeavour. "'Devotion' proves why there's been hype flying around Jessie Ware. It contains strokes of genius and really is worth making some time for."