A Week in Music featuring: The Milk, Duke Special, The Features, Saint Motel, King Tuff, Rage Against The Machine and Much More!

Albums of Note... The Milk release their debut album, Tales from the Thames Delta, via Sony records. Their nostalgic sound is tempered by modern electronics, which they use to segue between tracks and add an unexpected twist to their otherwise retro stylings. "Where debut albums often appear a little mismatched and lacking a strong sense of direction, Tales of the Thames Delta is a consistent and accomplished release with a maturity normally associated with artists well into their recording career." 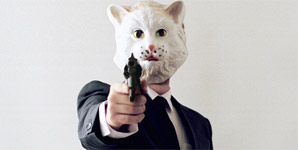 Duke Special (aka songwriter & instrumentalist Peter Wilson) returns with his tenth studio album. 'Oh Pioneer' is full of high drama and lively instrumentation, which calls to mind the likes of The Guillemots, Muse and Queen, whilst remaining distinctly the work of Wilson. "From the very off, Duke Special's craft is wonderful poetic storytelling and lyrical picture painting that joins force with catchy, toe-tapping pace. It's a refreshing, eclectic mix of instruments instead of the usual guitar bass and drums combo, but also sensitive instrumentation alongside Peter Wilson's distinctive soft vocal complete with its gentle vibrato." Dead Can Dance were one of 4AD's flagship bands back in the 1980s when they first started releasing music. After splitting initially in 1998, that relationship with 4AD dissipated. Now, though, the band are back, recording for PIAS and have released a new album entitled 'Anastasis.' Looking, as ever, on the darker side of life, Brendan Perry's lyrics form one of the highlights of the album (choice example: "All the queens horses and all the kings men, will never put these children back together again," as are Lisa Gerrard's Cocteau Twins-esque wordless vocal stylings. "Experimental without being superfluous, 'Anastasis' signifies a triumphant return for Dead Can Dance that can only bode well for their world tour this autumn."

The Features release their album 'Wilderness' on Kings of Leon's label, Serpents & Snakes. Comparisons to their label bosses have been inevitable but actually, The Features have more to offer than their forebears - they are a "smarter, more interesting" band, who "billow in and out of pertinent matters like global warming and government corruption and sway into more human, abstract notions of love without taking (themselves) seriously at all." A band so clearly in love with classic rock and roll, "Wilderness is like an update patch for a piece of software; it basically does the same thing as before, but offers a higher level of compatibility for 2012. Of course, you can always roll back to a previous version, and you'll barely notice the difference, but it's certainly worth the upgrade."


The Week in Video... Saint Motel's video for '1997' is set in a dark and dusky cabaret, with the song being played by a lounge band, as the indie pop quartet are transported in a trippy out of body experience, before returning to their own bodies, at the bar. The song itself is a catchy, alt-pop classic, with a killer chorus, reminiscent of The Shins, or a calmer version of The Shout Out Louds.

We Are Augustines' recent tour with Counting Crows was hampered when singer Billy McCarthy suffered an ankle injury. It's clearly not put them off the idea of a life on the road though, as the video for 'Philadelphia' sees the band in various settings, on huge outdoor stages, drumming by a campfire on the beach and jamming in back-room bars. This paean to the US city showcases Billy's gravelly voice once more and fans of the band will be glad to know that they will be returning to the road once more for their European dates, this month.

The Edinburgh electronica four piece North Atlantic Oscillation release new single 'Savage with Barometer' this week via Kscope. It's accompanied by a video directed by Brendan McCarthy and produced by Tony Doogan - known for his work with Super Furry Animals, Mogwai and Teenage Fanclub. The video is as downbeat as the song, featuring a man trying to cross several roads and finding his path permanently hampered. The video for King Tuff's 'Bad Thing' plays out like an American horror movie, the perfect match to the B-movie rock and roll that spews forth from King Tuff's trashy guitar. Signed to Sub Pop, King Tuff is the latest in the current trend of grunge and surf-influenced rock, reliant on a simple hook and a bucketload of distortion.


Music in the News... It's not always cool when famous people say they're a fan of your band. Especially not if that famous person is a politician, with very different views to your own. Tom Morello of Rage Against The Machine was recently enraged to discover that the US Republican politician Paul Ryan has said he's a fan of the band's music, but not the lyrics. RATM are known for their overtly anti-corporate standpoints and Morello retorted to the comments by saying "Well, I don't care for Paul Ryan's sound or his lyrics. his guiding vision of shifting revenue more radically to the one percent is antithetical to the message of Rage..."

It seems that the long-awaited return of No Doubt wouldn't have been so long-awaited, if it hadn't been for Gwen Stefani falling pregnant with Zuma. Stefani has explained that even though she felt ready to get cracking with a new album, back in 2008, her pregnancy had an adverse effect on her creativity and she was forced to shelve plans to record a new album. "It was really challenging to be pregnant and come off all the stuff I had done," she explains, "and try to write. And that's why things got really delayed; it was like, impossible. I just couldn't do it; I had nothing left to give."

And talking of delays, there has been yet another setback to the release of Azealia Banks' debut album proper. 'Broke With Expensive Tastes' was due to be released next month (September 2012) but the up-and-coming new rapper has decided. She revealed to her Twitter followers that she has plenty of exciting plans between now and then and insists that the reason for the delay will all become clear.

It's a surprise that Madonna finds any time to go out on tour and record new music, amidst the barrage of lawsuits that seem to fly her way. The latest in her recent slew of offences, Madonna has offended a group of Russian activists who have taken umbrage at the fact that the singer challenged the recent ban on gay pride marches in Russia. Madonna recently handed out pink bracelets at her St. Petersburg show, as well as speaking out in support of the members of Pussy Riot who were recently jailed; now a group of activists are trying to sue the singer to the tune of around $10.5 million.