Album of the Week... The Cult are bucking the trend for bands reforming and re-hashing old material, by continuing to release new material. Back in 2010, they may have given the impression that they were done with the album format, but with the release of 'Choice of Weapon,' it seems that this is no longer the case. This is the second long player that the band has released, post-reformation and sees them in fine form. "If this is The Cult in reflective mode, there's still ample proof of life in all its p*ssed off shades of crimson. Here The Wolf rails against the superficiality of current entertainers, oligarchs and politicians at leather belted full throttle, whilst Lucifer spirals down through the fringes of acid freak-outs. The Cult still have something to say and they think we should listen." 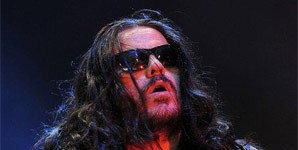 A Week in Video... Lianne La Havas' trajectory to stardom continues apace with the release of 'Is Your Love Big Enough.' A selection of live footage, interspersed with scenes of Lianne larking around backstage with her band, the video matches the joyous feel of the track, which demonstrates that her vocal talent is certainly "big enough for what's to come."

Pnau have been tasked with the challenge of re-working some of Elton John's classic back catalogue for a modern audience and with 'Sad,' they have come up trumps. The vintage, psychedelic video plays to the disco sound of the song, which Pnau have re-imagined in a way that sounds simultaneously on trend, yet faithful to Elton's original work.

'I Am The Least Of Your Problems' is the latest single from these radically-minded Welsh rockers Future Of The Left. It's accompanied by a typically frenetic video montage of black and white shots of the band, singing into a strobe light, and thrashing out their brief, effective punk anthem.

A Yorkshire-based band so enamoured with their local surroundings that they have named themselves after the famous Wharfedale ridge in Otley, much of The Chevin's video for Blue Eyes also seems to have been filmed there, as well. The video's director Ian Gamester has interspersed shots of the band playing live in the studio with footage of a young boy cavorting around the Yorkshire countryside, to the strains of The Chevin's ambitious country-tinged rock.


Interviews of the week... Pnau couldn't believe their luck when they were asked to re-work the musical output from Sir Elton John's entire musical career. But, as they explain in their interview with Contactmusic, once the initial excitement had faded, the fear started to set in: "it was incredibly exciting and a huge honour but it was like, 'Wow! What if we f*ck this up?'" they explain. They speak highly of their collaboration with Elton, though, who kept pushing the duo to achieve their own creative vision, when it came to reimagining their work.

Slow Club's Charles Watson and Rebecca Taylor reveal how they managed to recruit one of the movie world's biggest stars (none other than Harry Potter star Daniel Radcliffe) to star in the video for their single 'Beginners' and their ambition to work with the Talking Heads star David Byrne. In an interview that they take at least half-seriously (or perhaps they really do want to work with Lemar), they talk about their approach to songwriting, growing up in Sheffield / Rotherham and that all-important question of their biggest influences.


Live Review... It's been a long while since Garbage first graced our radio sets. In the mid nineties, they dominated the alternative music press with their gloriously maudlin hits such as 'Only Happy When It Rains' and 'Stupid Girl.' Now that they have made their return, with a new album and a string of tour dates to support its release. As the band graced the stage in singer Shirley Manson's hometown, her family were there to witness the occasion. It was clearly an emotional moment for Manson to be playing at the infamous Barrowlands venue once more and "dedicated 'Special' to former Goodbye Mr MacKenzie band mate and boyfriend, Martin Metcalfe." The band's new material seems to sit well alongside the crowd favourites, though the Glaswegian crowd went wildest for 'Push It,' from Version 2.0 more than any other played that night.

In the News... Frank Ocean caused quite a stir in the music world last week, when he published a blog post revealing that his first love was with a man. A number of music stars have spoken out in support of Frank, including Def Jam's co-founder Russell Simmons and fellow hip-hop star Busta Rhymes.

Little Richard has accused Prince of copying his style. "He took a lot from me but he acts like he don't even know you," said the ageing 'Tutti Frutti' rocker.

Rolling Stones' singer Mick Jagger has been described as "insane" by his own guitarist, Keith Richards. Luckily for Jagger, though, it was a term of endearment, as Richards was commenting on his sense of discipline.