A Week in Video... A gentle, folky number, rich with strings and rounded drums, the video for Rachel Sermanni's 'Waltz' errs on the side of the surreal, ending as it does with the singer dancing with a Mad Hatter, after a journey through the woods, calling on Alice in Wonderland-style imagery and providing the perfect backdrop to the gentle, leafy sound of her music. 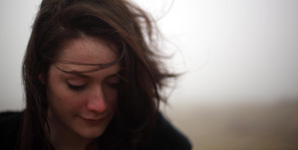 Cast of Cheers are releasing 'Human Elevator' as their next single; it's a catchy blend of pop and post-rock, dancing guitar lines and buoyant riffs. Following on from a number of festival appearances this summer, the band have gained such a following already that if you Google 'Cast of Cheers,' you are more likely to come up with links to their music than you are to land on information about the actual cast of 'Cheers.' An achievement in itself.

Sydney band Rapids release another slice of off-the-wall rock, in the form of 'Krang.' The track is taken from their 'Holland Air' EP and the video takes the form of a series of warped news reports, which may or may not be cryptically related to the song itself, which appears to be 'about' a lost wallet. or something.

The video for 'The Woods' by Frost, was directed by Carl Critical. The Norwegian duo's ethereal electro-pop is accompanied by a montage of wintery scenes, with two young kids gambolling around in the snow. Albums of Note... What happens when you cross a Swedish singer-songwriter and a bass player from the West End? You get Alberta Cross, who release their second album 'Songs of Patience' via PIAS. The album is a mixture of classic rock influences, from Pink Floyd and Led Zeppelin to more modern bands such as Black Rebel Motorcycle Club and Oasis. "From the opening chords of Magnolia to the final moments of future live anthem Bonfire, Songs Of Patience provides ten tracks of deep and rewarding folk-tinged rock which improves with each listen. they can only convert the unaware, grow in stature and cement their place as one of the most intriguing acts of the 21st Century."

The Noisettes' latest album 'Contact' sees the band in fine form. This is the third full-length release for The Noisettes who seemed to have disappeared without trace after the success of 'Don't Upset the Rhythm' back in 2009. This latest album sees the band jumping between musical styles, showing off singer Shingai's strong vocal range: "it's like a joyride through pop, folk, and acoustic influences, all having been given a Noisettes finish."

Kentucky's Houndmouth release their debut, self-titled EP; an introduction to their "folksy Americana blues" which might make you think "their dads are probably chilled-out hippies who gatecrash rehearsals and smoke pot with the band." The band are about to head off on a North American tour with Dry the River, which should earn them some extra exposure; this is an impressive debut for their quintessentially American tunes. "Houndmouth can write a catchy tune with intriguing story-based lyrics, and under the right production guidance they have the potential to add another dimension to their sound." Music in the News... Controversial rap act Odd Future bemused fans at Leeds Festival when they attacked a blow-up sex doll on stage, during their performance. The doll was apparently bound and gagged and Jasper Dolphin stamped on its head, prompting Tyler, the Creator to remark "You body slammed that b**ch. Is she OK?" Odd Future have never been onside with the feminists and these latest antics are sure to provoke further outrage.

A 'surprise' performance from Green Day at the Reading festival brought the NME / Radio 1 tent to a standstill, with security being forced to close the tent. Those who weren't lucky enough to be sealed inside were still able to catch the show on the big screens. It was originally reported that they would be performing their album 'Dookie' in its entirety but actually, fans were treated to songs from various stages of their career, including 'Stay the Night,' from their forthcoming album 'Uno!'

It's not been a good year for UK festivals and Creamfields festival fell foul of the unpredictable August weather. Flooding onsite was so bad that festival organisers were forced to call off the final day of the event, with revellers being forced to go home early. A message on the festival's website read "The heavy downpour overnight has created issues across the site leaving many areas unusable. It is our primary concern at this time that assistance is given to those on site and ensure those campers exit safely."

The battle of the divas continues: Mariah Carey is apparently incensed that American Idol judges want Nicki Minaj to take the second judge's position on the show. Reports suggest that Carey was led to believe that she would be the only female judge on the show and isn't happy that Minaj is in the running.