A Week in Music featuring: Liars, Deny May, Hadouken, The View, Lauryn Hill, Peaking Lights and much more!

A Week in Video... There's a whole raft of new videos on the site this week and we've selected some of the best ones for you. Liars return with a great new video that totally belies the chilled-out vibe of the song. Whilst No.1 Against the Rush rumbles gently over arpeggiated synths, the viewer is 'treated' to a tale of kidnap and torture, as the band's singer, Angus Young, falls victim to a sadistic old man. Director Todd Cole has really drawn on Liars' dark sense of humour with this beguiling visual accompaniment. Liars' latest album 'WIXIW' was released last month. 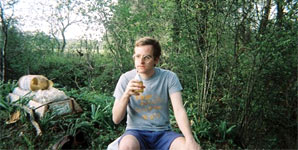 Dent May's latest track 'Best Friend' is a catchy slice of retro pop, a hazy summery tune. And the video reciprocates with the summery feel, as Dent plays in front of psychedelic flow-power backdrops and frolic in the sunshine. And if you're wondering who those other band members are there playing along with Dent. well, you'll just have to look a little closer to figure it out.

Mining a similar vein to Vampire Weekend, this tropical track from Kotki Dwa is accompanied by a video that was apparently filmed in conjunction with the National Trust. As the song takes an angsty twist, the video features the band camping in the British countryside, until their "Staycation" is interrupted by some unruly over-sized insects.

Hadouken! have cranked up the 'club banger' dial for their latest single, which is already getting them tons of attention on the radio. Bad Signal features a sample of the song 'You Keep Me Hanging On' (by The Supremes), the band have almost reached Pendulum-esque levels of festival-ready euphoria. 'Bad Signal' is a seedy tale of alcohol-induced regret, interspersed with footage of Hadouken! playing live.

With its gentle refrain of "how long has it been since you fell in love with a boy like me?" you'd be forgiven for expecting The View to choose a video for 'How Long' telling the tale of a romantic love story. You'd be wrong, of course and we'd expect nothing less from these young Scottish rapscallions. Expect blood and suffocating ladies to accompany that gentle refrain.


Albums of the Week... This Satanic offering from Domino Recording Co's finest Peaking Lights is nowhere near as dark as its title may suggest. Far from it, in fact. Lucifer is packed with psychedelic, dubby guitar riffs and even features guest vocals from the couple's new baby, Mikko. You can't get any less Satanic than that, really. "Peaking Lights has encapsulated a day's worth of positive energy, high-on-life euphoria and other hippy-related whimsy. Clearly influenced by the birth of their child, the album hardly encapsulates the heavy-drum led momentum of 936 and instead floats around aimlessly in a sea of hazy bliss." Rispah is the follow-up album to The Invisible's Mercury-nominated debut (released in 2009) and is dedicated to the memory of Dave Okumu's late mother. Okumu describes the album as a "love letter to grief" and it's a far less pop-orientated affair than the band's last longplayer. "The band is leaning very much into the dark this time round, the album allows the band to explore the depths of their musical ambitions with the output being murky and claustrophobic, yet totally listenable at the same time."


Music in the News... Adele announced last week that she is pregnant with her first child. She made the announcement via an official statement on her website, telling her fans "I'm delighted to announce that Simon and I are expecting our first child together. I wanted you to hear the news direct from me, obviously we're over the moon and very excited but please respect our privacy at this precious time. Yours always, Adele xx

Lauryn Hill is facing a jail term, after she pleaded guilty to tax evasion last week. The former Fugees singer did not file her tax returns between 2005 and 2007, though she had earned around $1.8 million during that time.