This week, you can catch up with some more artists that we spoke to at Leeds Festival, including Lucy Rose and Gallows and check out all the latest video and album releases. 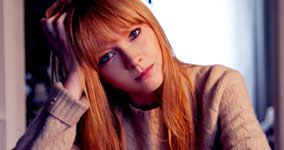 Chatting to Contactmusic, Lucy Rose speaks of her surprise at being asked to play Reading and Leeds festival, which are known for being predominantly rock-orientated. She'd already got the excitement of Reading festival out of the way and explains how excited she was to take part in all of the promo activities that other artists frown upon. Lucy started to learn the guitar as a teenager and at 18, left home and moved to London.

"I taught myself to play guitar and I knew I wasn't very good, I was trying really hard to get better for a long time. I had no friends in London. but it felt like the most liberating time. discovering something completely new to me, on my own."

Theme Park have had a fun summer of festivals, with Beacons and Latitude under their belt already and speak to Contactmusic after their Leeds festival set, as they prepare for a second performance at the Transgressive party. The band are currently gearing up for a tour with Bloc Party and heading off overseas to play a festival in Jakarta

The band have been together since March last year and they reveal the story of how they were lucky enough to have a pal working as a talent scout at Transgressive, which helped get their recording career off the ground.

After losing their lead singer, Frank Carter, the rest of Gallows pulled rank, recruited another vocalist and set about doing what they do best: playing very loud and raucous rock music. The band see Leeds as a "home from home;" even aside from the festival, they have played some of their best club shows in the city and have a lot of friends in the area, too.

Since Wade joined, the band's songwriting process has been more "cohesive" and collaborative and Gallows reckon that this newfound togetherness has translated well when they play live. When Wade joins the interview, the Canadian export explains that they're committed to making the band work: "It's been good, it's been a lot of time on a plane but, I mean, it's just a case of making it work. Now that the record's done, everybody has just got to show up on that first day of the tour.

The Week in Video...The latest video from The Other Tribe has them looking very. well... tribal! The action takes the form of a forest dance party, the perfect setting for their organic sounding club anthems. The band, who hail from Bristol, will be releasing 'Skirts' on September 30, 2012 through Sony Music Entertainment UK Ltd / Relentless Records, before heading off on a UK tour.

It's a surreal affair, the video for 'Presence of Mind' by The Fresh and Onlys. A woman boards a bus, scheduled to leave 'yesterday,' with a bloodied face and bite marks on her neck. A clock moves backwards, the bus flies into the sky, a vampire is killed. if all this sounds like a bad dream, then that's probably because that exactly how the video feels. All with the Fresh & Onlys providing a lilting, psychedelic soundtrack The Charlatans' singer Tim Burgess is back with a blonde mop and a chilled-out solo single, entitled 'White.' If you're expecting something along similar lines to the baggy-indie of The Charlatans, you may well find yourself surprised. 'White' comes across as more of a retro-pop song, with Burgess playing the laconic chanteuse. The video is a trippy array of computer graphics, with images of Tim melting into the kaleidoscopic background.

Skunk Anansie are back with a new single, from their fifth studio album 'Black Traffic.' The band rose to fame in the 1990s, something of an anomaly amongst the Britpop movement, as they jostled for attention, with much heavier sound than many of their contemporaries. Singer Skin is fine form here, in this monochrome video for 'I Believed In You,' as she shouts down a former lover for failing her. It's classic Skunk Anansie and could well be the song that puts Sthe band back on the map.

Albums of Note...Cult rockers Swans return with The Seer. Herein lies a two-hour masterpiece from Michael Gira and his band; a compilation of music that he says is a culmination of thirty years of learning and working on musical compositions. It's an accomplished work of art. With Thor Harris on board, bringing his expert percussion to Gira's compositions, the songs on The Seer are given extra dimension: "on 'Mother Of The World', his disciplined snare-rolls add gravitas to a barbed riff, whilst his drum-work on the twenty-three minute closer 'The Apostate' is as unhinged and exhilarating as on any western rock album of the last decade or five, veering between euphoric tribal beats and into sheer cacophony."

The Seer gets 9/10 here at Contactmusic; it may have been a long time coming but it was well worth the wait.

Mark Knopfler may be forever associated with Dire Straits but he has now released more solo albums than he did with the band that made him famous. Now on his seventh solo outing, Privateering is "an ambitious double record that continues his latter day purple patch. Equal helpings of Celtic inspired folk, traditional blues, country, and that Geordie sense of humour, make the 20 tracks here less of a marathon, and more a stroll down memory lane."

Knopfler has a six-night residency booked at the Royal Albert Hall next year and the tracks on Privateering will "serve well to bolster an already expansive set list for those shows." Festival Review...As the UK festival season draws to a close, Smugglers Festival in Kent was triumph, as revellers soaked up the atmosphere and basked in the musical entertainment - much of which was made up of musicians from the local area. Tom Williams & The Boat, who hail from nearby Tunbridge Wells, tore through a blistering set on the Sunday night, proclaiming to have had "a ruddy marvellous time." Other highlights included Will Varley's utterly bonkers songwriting, and the folky-hosts, Cocoslovers, making the weekend a truly eclectic one: "the whole atmosphere was one of surreal suspended reality where the real world disappeared for a while and life was somewhat, all too briefly, sweeter."

Music in the News..The Rolling Stones announced that they will be attending the premiere of the latest documentary to have been made about their career. Crossfire Hurricane will debut at the London Film in October and Mick, Keith, Charlie and Ronnie are all expected to be in attendance at the red carpet event. 2012 marks the 50th anniversary of the Rolling Stones, who are one of the most influential bands on the planet.

When Forbes released their 'hip-hop rich list,' many were surprised to see Dr. Dre at the top, with earnings of $110 million in the last year, before tax. Dre's not making the bulk of his money from his music any more, though; his fortune has been amassed by the sale of his popular headphones, named 'Beats by Dre.'