Interview Highlights... We caught up with Band of Horses as they hit the promo trail in London, ahead of their iTunes festival slot, which saw them sharing a stage with Jack White. The band are promoting their latest album, Mirage Rock, which Ben Bridwell describes as "a bit more of a looser vibe than our previous albums; it's very... haphazard. It's very loose and raw at times, but I think it also has its moments that hearken back to the older things we've done, while hopefully pushing forward." Having toured with Pearl Jam in the past, Ben revealed that they have taken influence from Vedder's band, who have managed to sustain an enduring career in a tough industry: "To make it this long in the business as they have, to endure a career that long is really inspiring, and the fact that they're so down to earth. The same thing goes for the Foo Fighters." 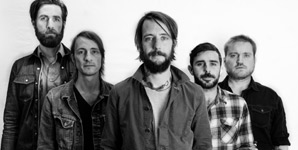 Skunk Anansie had just played the release show for their Black Traffic album, when we spoke to singer Skin, who was keen to stress that the band's re-emergence is not a reformation: "We've been back for four years now, it's not a reformation thing anymore, it's a band putting out a great album. " and she also explained why the band have stuck to their guns all these years and remained committed to the sound that they've forged for themselves, saying "Our sound is our sound. It doesn't really matter what we do, we're still going to sound like Skunk Anansie. I think that you have to be quite wary of jumping on other genres because they're trendy. Politically and ego-wise, a genre change is not something that we can stretch to." Skin is adamant that Skunk Anansie are "the best live band around" and makes a pretty convincing case for her band, right here. The Week in Video... The chilling, greyed-out video to Blood Red Shoes' 'In Time To Voices' is the perfect visual accompaniment to their brooding, sultry sound. As the song reaches its climax, an arm-wrestling contest between singer Laura Mary and a greased up muscle-man culminates in Laura-Mary deploying the use of a broken stiletto, to ensure that she walks away with the prize money. Former Razorlight drummer Andy Burrows releases 'Because I Know That I Can,' via Play It Again Sam Records. It's a laid-back acoustic number and the video sees Andy auditioning in a theatre, in front of a panel of weary looking judges, who find themselves attacked by a bunch of disgruntled wannabes. Tu Fawning's 'Wager' video is a dramatic monochrome affair. The track is taken from their album 'A Monument' and consists of grainy shots of the band, interspersed with time-lapse images of nature, bursting across the screen in black and white. The band have been getting some excellent reviews in the press and are starting to break away from the 'ones to watch' tag and are briskly becoming the ones that everyone's already watching. The latest album from Bob Dylan has been hailed as a modern classic by many. Dylan now releases a video for 'Duquesne Whistle,' taken from 'Tempest,' the folk legend's 35th studio album. Underpinned by Dylan's gutteral hoary vocal, the video follows a star-struck young man who steals a rose to give to the object of his affections and finds himself in trouble with the law... ad some fairly unsavoury thugs Meanwhile, there are shots of Dylan wandering around the streets at night, followed by a motley crew of characters, who eventually step over the young lover as he lay bloodied in the street. It's an understated video, for an understated, bluesy song. Live Reviews... As festival season draws to a close, Bestival played out the end of the summer in style. With so many UK festivals blighted by horrific weather conditions, those heading to Bestival must have been apprehensive that the festival would be yet another wash out. The gods were on their side though and the weather held out. For an idea of what Bestival is like, take "the best bits of Glastonbury, combine it with the refined subtlety of Latitude, add a dash of Primavera's near flawless bookings and you're somewhere in the right vicinity." Highlights of the weekend included Hot Chip's "teasingly perfect dance party," Soulwax's mini-rave in the Big Top and The Horrors' "hazily energetic bundle of krautrock-influenced psychedelia." And of course, New Order's headline slot was something of a treat, especially when they unleashed the Joy Division classic 'Love Will Tear Us Apart.' Gold Panda's "hallucinogenic techno" closed the festival in style, and did just enough to wash away the recent horror that was Spiritualized's troubled slot in the Big Top. The "unassuming but breath-taking lo-fi pop" of Perfume Genius went down a treat at Birmingham's Glee club. Most of the evening's material came from his 2012 album 'Put Your Back N 2 It,' "an album that is much more expansive than his debut but still wrought with the same insecurities and eccentricities." Mike Hadreas (aka Perfume Genius) works well with his band but it is when he returns to the stage alone for his encore that he is at his most powerful: "closing with regular finale and favourite 'Mr Petersen'. For all the allocation of duties present, on the night it is its most touching moment and the summation" of Hadreas' work. Album of the Week... Lucy Rose's debut solo album ' Like I Used To' sets her apart from other songwriters of her ilk. Her "tender voice" lends a fragility to the songs, though occasionally, the tracks lack individuality and merge into one. However, as a whole, the record "holds some irresistible sounds that accompany the beauty of Lucy Rose's presence wonderfully. The fact you can hear every strum, slide and tapping beat means a natural atmosphere is created." Music in the News... Nicki Minaj has finally been confirmed as one of the judges on the next series of American Idol. Hardcore fans who have followed Minaj since her plain-faced days as an underground rapper may well be shaking their heads in disbelief as the luminous-wigged Minaj posed for her photo call with Mariah Carey, Keith Urban and Randy Jackson but with her straight-talking rep, she could well be the perfect choice. Led Zeppelin have announced that they will release a new documentary film, detailing the events surrounding their 2007 reunion gig. Since their split in 1980, fans have been waiting for the band to reform and they finally granted them their wish, with 20 million people applying for just 18,000 tickets. The movie is directed by Dick Carruthers.