Festival season is still in full swing and we have been catching up with some of this summer's brightest new stars, as well as some established headliners. Here's the pick of the crop: 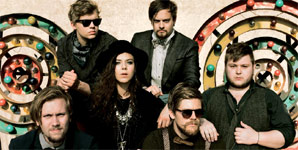 We spoke to Of Monsters and Men, who made their UK festival debut by opening up Leeds Festival on the Friday. Singer and guitarist Nanna chatted about Icelandic music, the joys of writing her lyrics in the English language, the surprise of breaking America, despite having never toured there and the challenges of recording with a live sound. It turned out to be a fateful moment - a man walked past their sound-check, liked what he heard and passed their details to a friend, who just happened to be a radio plugger in the US. Before long, they were playing sold-out shows in the States, all as a result of that chance encounter.

The band have started to think about their second album, too; they're not resting on their laurels. "Ideas are coming," reveals Nanna, tantalisingly. Their most recent album, 'My Head Is An Animal' is also reviewed on the site and Nanna and Ragnar's vocals are compared to "Ellie Goulding paired with a less gruff Marcus Mumford." With 11 tracks of gently strummed guitars, tribal drums and echoed voices, our reviewer surmises "If you're going spend an evening or two, even three in the open air, taking in the fresh breeze along with a load of campfire debris, then 'My Head Is An Animal' might be just be perfect." We also caught up with indie-rockers Alt-J at Leeds festival. Band member Will was nursing a hangover from their performance at Reading festival the previous night. The band have gone from strength to strength since their days of sharing a two bed flat, sleeping on the floor and living off of Jobseeker's Allowance. He also cleared up the mystery of Joe dad's involvement in the band. His dad was a gigging musician in Southampton and has been a big supporter of the band but just to clear things up "he hasn't written any of the songs. he might have done but Joe hasn't told me." Alt-J are planning to tour until Christmas, but they're still trying to find time to write new material and it sounds as though they are planning to stick to their genre-hopping styles. They've tried to pick a few tricks up off other bands they've played with, such as Wild Beasts "but I think I've forgotten them all" he confesses.

Roots Manuva gave us a few moments of his time following his triumphant headline set at Beacons Festival. The hip-hope legend revealed that he's a big fan of the Yorkshire countryside, as well as the music that's sprung from the region. Talking about his performance, Roots explained "Every time I can, I use a band like this; it's a very special thing to do. All the records that I've made over the years involve different levels of collaborative efforts and only by bringing a full set up on stage can I properly explore my past songs and perform them as they should be performed. Even when it's just small parts like, I may use the drummer to recreate a drum part that I've looped on a track or I might have used a bit of guitar or keyboard. It's really just a mish-mash of all the different bands and instruments I've use over the years right in front of you." And for anyone worrying that the career-spanning nostalgia of his set may have been a sign that he's slowing to an end; never fear. Roots Manuva intends to go on and on: "It will be forever. It's forever and ever," he promised.


Festival Round-Ups!... First up in our recent festival review is the mud-fest that was Leeds Festival. Leeds fest has been a partner festival to Reading festival for some years and in 2012, boasted Foo Fighters, The Cure and Kasabian amongst some of the bigger bands on the bill. Highlights of the weekend included Pulled Apart By Horses; the local rock heroes opened the main stage on the Friday in typically raucous style and are hailed as "one of the most inspired choices for festival opener ever" and they managed to inspire the first mosh-pit of the weekend, just a few seconds into 'Back to the F*** Yeah.'

On the Saturday, Cancer Bats providing entertainment for those who like it heavy, whilst The Cure provided an atmospheric end to the arrangements. Green Day fans clung to the hope that Green Day would be repeating their surprise performance at Reading on the Sunday but were disappointed. Those that did stick around to watch Leeds-based Post War Glamour Girls, however, were pleasantly surprised by the band's "melancholy and deeply textured rock." Metal titans Mastodon also impressed; a stark contrast to the lad-rock of Kasabian, whose great hits set was made all the better by the stage's great sound.

Leicester's Summer Sundae event has built itself a grand reputation for showcasing some of the best up and coming bands in the UK. This year's event had been scaled back from previous efforts and the allure of the headliners had withered somewhat. There was still plenty to keep our reviewer happy though, including Dog Is Dead, Ed Harcourt and tUne-yArDs. Last year, Beacons Festival, in Skipton, in the Yorkshire Dales, should have enjoyed its debut but sadly, the event was called off by health and safety executives. Thankfully, the organisers moved the site and defied the rain this year. The daytime provided a "wealth of family-based activity" but the evening was "an adult's playground," with Friday night's combination of Mount Kimbie and Roots Manuva getting things off to a great start. The mix of music was one of the festival's charms: Wild Beasts jostled for attention with Oneman and Pearson Sound, whilst Willis Earl Beal's haunting performance was as notable as Toots and the Maytals' rousing headline slot.


The Week in Video... Seye's tropical brand of pop doesn't get any more summery than it does in the video for 'Mexicana Bounce.' The video's set on a beach that's been constructed on top of a skyscraper and gives off a real feel of a city gripped in the throes of the summer heat. With hints of afro-beat and electronica, Seye has managed to cultivate a unique sound for himself.

The Chevin return with a slick new video for 'Champion.' Sounding not entirely unlike U2, the atmospheric number is propelled by pulsing synth lines and the video is a sleek and understated affair.