The weekend of the 18th & 19th of October 2014 will see the hosting of the fourth annual Carefully Planned festival in Manchester, taking place over seven venues in the city and featuring over 100 bands from the festival's hometown and outside, all for the wallet-friendly price of  15gbp for both days or 10 gbp for one. 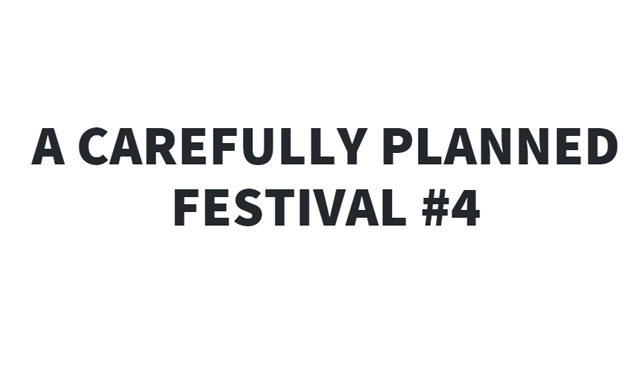 Rather than attempt a comprehensive summation of the line-up in its entirety here are 10 acts that anyone attending should be sure not to miss, even when two of the acts in question are scheduled to play at the same time meaning that you'd have to miss one of them.

a.P.A.t.T - Kraak - Saturday, 21:20
Liverpool collective a.P.A.t.T's latest single, 'Just Because', was a disgustingly catchy slice of Euro-trance, but they are no strangers to funk, metal, math-rock, Merseybeat, prog or any other genre you could name or invent and are one of the country's most bewildering live acts. If this list of ten must-see acts were to be whittled down to one then A.P.A.t.T would be that one.

Her Name Is Calla - Mint Lounge - Sunday, 21:00
Her Name Is Calla have undergone something of a reinvention in the last few years. 2014's Navigator was much less wide-eyed than the band's earlier material, but its caustic post-rock is just as riveting as the work that preceded it and they remain a spectacular live band.

Juffage - Cord - Saturday, 20:40
Juffage's work on record is all fractured beats and euphoric bursts, bringing to mind at different times Subtle, Do Make Say Think or The Octopus Project. His live show is much more stripped back but no less intense, with Juffage dragging oblique and uncommon sounds from his instruments as does David Thomas Broughton.

Remember Remember - Soup Kitchen - Sunday, 18:05
Rock Action signees Remember Remember specialise in a line of slowly unfurling instrumental post-rock that has seen them oft-compared to label bosses Mogwai. This is because they really sound a lot like Mogwai, particularly circa-Happy Songs For Happy People.

The School - Soup Kitchen - Saturday, 22:00
The School are darlings of the indiepop scene, and the Cardiff octet have already amassed an enviable collection of bubblegum-pop hooks across two albums, with a third due to be released shortly.

Shelley Jane - Cord - Saturday, 14:40
Business ethics dictates that I must declare I have released Shelley Jane's first EP on my own record label, but there is a reason for it; her ukelele-driven gems are pop at its most primordial.

Tekla - Soup Kitchen - Saturday, 13:00
Tekla opens up the festival's proceedings with her bewitching, introspective acoustic folk. Tekla's music is fragile, bare and barely there but completely hypnotic and enrapturing.

Trust Fund - The Castle - Saturday, 23:30
Bristolians Trust Fund have recently released a split EP with Joanna Gruesome and are gaining a reputation for their lo-fi shout-along punk that will go down a treat with fans of Radiator Hospital, Martha and all that good stuff.