We seem to be elbow deep in an age where albums are worthless if we define 'worth' by its traditional capitalistic meaning. Prior to the official release of 'Zen Summer', the fourth album by Los Angeles native Cloud (real name Tyler Taormina), the entire record was put online to be streamed which means that, along with the fact that this review you are reading is essentially meaningless as it would be quicker to find a link (find it for yourself) to said stream than to read about it in its entirety, it was made available to the entire world before it could be purchased as an artefact. But only to those who are happy to consume music whilst staring at a computer (or mobile phone) screen. 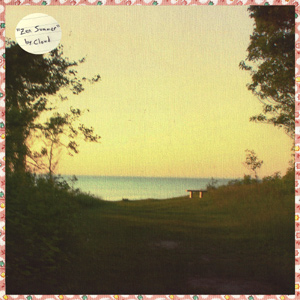 This isn't incidental to a review of 'Zen Summer' as the original vinyl run of this album is of 300 copies, which means that the majority of the audience for the album, and indeed this review, will have consumed the album in such a way, and it is certainly not an album that can be appreciated fully in such sterile, entirely modern surroundings.

For like its predecessor, 2013's astonishing breakthrough full-length 'Comfort Songs', it is an album to nestle under the covers with, whether said covers be physical or metaphorical. It follows the same format; naked hearts-on-sleeves song-writing wrapped up in swirling repetitive melodies that combine the stargazing schematics of Dane dream-poppers Mew with the raw, delivery of Neutral Milk Hotel and Clap Your Hands Say Yeah.

'Zen Summer' isn't as strong an album as its predecessor but for one exception. It neither matches the highlights of it nor does it possess the same kind of consistency, but those familiar with 'Comfort Songs' know that this is barely a criticism; virtually no albums do so. Where 'Zen Summer' does offer improvement is in the layering and placing of sounds; the guitar squalls of "Sunshine Psych" replicate that magical abrasive/immersive atmos that My Bloody Valentine trademarked circa 'Isn't Anything' (particularly on "I Can See It But I Can't Feel"), whilst single "Melting Cassatt" is awash with trickling guitar lines and tropical percussion in a manner akin to Animal Collective on 'Feels' or even the fondly-remembered but oft-forgotten Ruby Suns.

What makes 'Zen Summer' so appealing, however, is the things that it contains that the aforementioned artists eschew, particularly the hyper-personal lyrics peppered across the album that achieve that rare trick of being just clear enough to paint a picture whilst giving enough room for you to supplant yourself into the narrative should you wish to.

Nowhere is this more true than the stunning finale, the previously mentioned exception of "Rainbow Road". It is the only track on the album where Cloud's vocals are given support by another body, backed here in the form of a small choir in the chorus, but it is the most personal as well as the most striking. Between breath-taking choruses he pines breathlessly;

It is the perfect closer to the album as it offers the same promise that "Comfort Songs" did; that Cloud could become one of the greatest song-writers of our age, even if our age might not deserve him.