Review of Zen Of Logic Album by DJ Logic 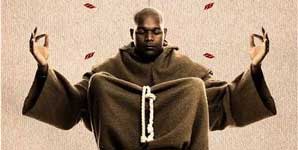 It's funny how music goes around in circles. As soon as I popped DJ Logic's – Zen of Logic in the CD player it took me back to a time in hip-hop that I remember fondly. Back in the daisy age, when artists like De La Soul & Tribe called quest were riding high – Mo Wax was the cutting edge label housing the likes of DJ shadow – Hip-hop wasn't about guns or crime it was about jazzy thinking – freedom combined with invention and paying respect to the old jazz masters. I am not saying that Logic's – Zen of Logic is old skool and nothing else, but it certainly evokes memories of those days and that isn't a bad thing.

Beats meet west as one of the world's most creative turntablists returns with the long awaited follow up to 2002's The Anamoly (Ropeadope/Rykodisc). Produced by long time collaborator Scotty Harding (Wu-Tang, Prince Paul), Zen of Logic travels down many paths, linked by two turntables and a mixer. From Afro-Dub (featuring Antibalas), Ghetto Funk (featuring John Medeski), What is Jazz? (featuring Charlie Hunter); and back-handed hip-hop (with MCs SubConscious and Creature), Logic puts together a modern day mix-up masterpiece that will no doubt please lovers of alternative Hip Hop and beats.

The theorem of turntablist-as-musician has been proven in the capable hands of DJ Logic, who with jazz as his foundation, barrelled through barriers to become a wax innovator, crossing genres and sprinkling his sound across the map. Not just another DJ from 'Around the way' (though originally from the Bronx), Logic has the credentials to back up his reputation as a musician and visionary – after all, this is a man who helped found the Black Rock Coalition, established in 1985.

Logic was the first DJ to play esteemed New York Jazz club Blue Note and has performed live with an eclectic mix of artists such as Charlie Hunter, Medeski, Martin & Wood and Ron Carter amongst many more notables. He's toured with Ben Harper, Jack Johnson, and The Grateful Dead and has affiliations with Joshua Redman and Ursula Rucker, versatile in the extreme.

Although DJ Logic keeps good company as an innovator and pioneer, his low-key attitude and beginnings remain most humble. Starting on the steps of Manhattan's downtown jazz fixture, the old Knitting Factory on Houston, his dad would drop him off for gigs when high school let out. Soon, he was taken under the mighty rock wings of Living Colour guitarist Vernon Reid, who became a musical mentor. Logic went on to appear on Reid's album, as well as those of trumpeter Graham Haynes and clarinettist Don Bryon, both who had been taken by his original sound and style. That style focuses on musicality – letting each sound breathe and have life – more than straight-up manipulation through technology. DJ Logic's first album in four years, Zen of Logic, is a foray into the eclecticism for which he is known, as well as a culmination of newfound experiences and musical meetings of the mind, soul and instrument. He's taken time out from intense touring and collaborating to lay down his own revolution on wax, drawing directly on those days. Building on his legacy and contribution to the DJ genre, Logic is an artist who at once pays homage to his predecessors, while pushing the envelope, bringing new sounds and a unique style to a modern moment.