Never one to rest on his laurels, or let his energies be particularly side tracked, Drew Lustman follows up his fourth album 'In The Wild' with an EP that takes the moderately avant garde pretexts of it's source material and throws curve ball after curve ball back at them. 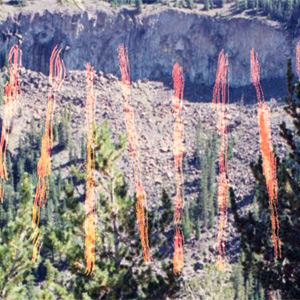 One of the most intriguing is the desultory, grey scale remix of 'Frontin'', shaped by Blueberry Records' "Beats Technician" Brrd, but sounding like a dead ringer for Boards of Canada during their Trans Canada Highway era. In fact, the more enveloped the listener gets into '///I\II\\\\' (The name, of course, is a ridiculous conceit, but ultimately a forgiveable one) the more apparent it becomes that it's only peripherally related to it's mother record, much in the same way BoC crafted a set of gloomier, less pastoral soundscapes subsequently than were on to be found on 'The Campfire Headphase'.

Fewer things scare listeners more than the words "License to experiment", but here it's permission that leads to some of the year's finest electronic music. Planet Mu label boss Mike Paradinas transforms 'Rolling' from its original form into a truly exquisite piece of jazz flecked techno which sounds like a long lost piece of genius from the early nineties. Lustman himself embraces the ambitious desire for reconstruction on 'GA 2 Tape Outcome.z130583', the result of working with "prepared musical situations" routed and re-routed through a Tascam 4-track recorder and a battered VHS. Only slightly less odd, 'Greater Antilles' - which appears in two distinct parts on 'In The Wild' - turns into an uninterrupted composite here, one that offers, if anything. fewer means of sensible interpretation than before.

Where much attention is paid to how the stuff played out in the first place, it's still good too. Here 'Do Me', which is as urgent as 'In The Wild' becomes via it's keening steel drum melody and uber-repetitive "Do Me Harm" sample, returns from some alternate universe as a soulful, late night jam around the piano, its breaks more dominant. The closing duo - we'll just call them "M" and "P" for simplicity's sake - are meant to be doppelgängers "One light, one dark" and both set up around the minimalist tics that speak to ghosts, emptiness and the mind's ability to play tricks on us: the white space Lustman allows in between the cracks is designed to be filled by you with angels or monsters, your choice.

There is a moment in which being "Out there" becomes a way of life: like Brando's Colonel Kurtz, you simply split from the whole programme, sending only fragments, broken telegrams and garbed signals back from the horizon. Drew Lustman may reach that point of disconnection soon, but these seemingly random assemblies he may send back will still be treasured, for sure.