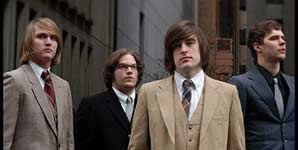 Forgive Durden appear to have a propensity for ludicrous song titles, but don't let that put you off. What they can offer is a refreshing break from the norm. This is part emo rock, but with strange, almost prog influences.

Choruses are delightfully sing-a-long, and guitars are tight and well crafted. Vocals at times feel as though they drift towards a whine, although the rest of the song drags them along well enough.

There's not really enough on offer to make you fall out of your chair, but at least you won't be dozing.