Review of Postcards from Hell Album by Get Amped 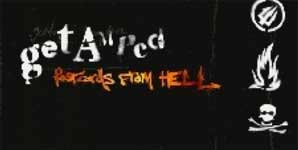 With a title like that, you know you're going to get an earful of rock! Get Amped bring you a feast of well-produced, commercially tinged riff-age. No mindless thrashing here though, there is a tender, intelligent side to them too.

Influences are easy to name with this sort of stuff. There are not unpleasant echoes of Grant from Feeder in the more subtle parts of the vocal delivery, and indeed there is something of Feeder running through a lot of the riff structures as well.

Standout tracks have to be "Reject and Sterilise" on the rock-ier end of the spectrum, and of the more serene moments, "In Loving Memory" is the winner.

It is very difficult to highlight any particularly negative aspects of Get Amped's music in the context of their genre. If you like no-nonsense, tightly played rock, with a sense of melody and sing along choruses, then this is a must have. Get Amped would appear to have the ability to bridge that difficult gap between artists like Feeder and Silverchair, and the faux versions of these bands such as Busted and McFly. If they can capture both the serious and the commercial markets then their record company are going to love them!