Review of Holding Hands With Jamie Album by Girl Band

A great pop song can have you singing along and tapping your toes almost instantaneously. A good folk song can stir your emotions, a fantastic dance track have you skipping towards the floor by the 2nd bar and potent piece of rap can make you question everything from the 'establishment' to an existential crisis. Sometimes, though, it's just a relief to have some unrepentant, unforgiving, ubiquitous noise. 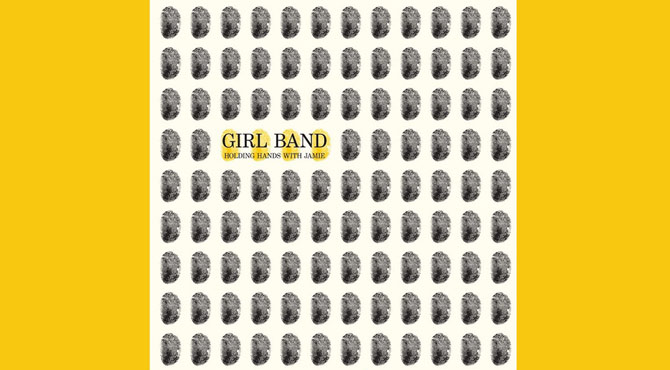 Ever so occasionally, mainstream consciousness is rudely awoken and given a much needed jolt by something unfamiliar and slightly disquieting. From punk to grunge, death metal to industrial, The Jesus & Mary Chain to MBV and latterly the likes of Royal Blood and The Slaves. All have possessed a certain menacing potency that is capable of terrifying some and exciting others.

Dublin's very own Girl Band have already made a lot of people sit up and listen with their much lauded live performances. With the release of their debut album, 'Holding Hands With Jamie', they could be about to make many more ears prick up and bleed. A parental guidance sticker should be suggested as this album contains sounds of a disturbing nature. This is about as far from easy listening as Slipknot but in an entirely, thankfully, different direction.

On the nine track debut there's electrifying industrial demolition, gnawing Post-Punk ritualistic tribal incantations and devastating mechanical meltdown. From the relentless onslaught of opening track 'Umbongo' you know you're in for no easy ride. 'Pears For Lunch' marries the rawest elements of The Birthday Party with the most manic of darkened Bauhaus (Double Dare) moments to create an alarming and arresting combination. 'Paul' is a frenzied attack on the senses; seven minutes of jagged devilishness, the musical equivalent of psychosis whilst 'The Last Riddler' cuts it a lot shorter but just condenses the terror into a more succinct package. Just when you think you've approached a moment of calm you can be guaranteed there's a moment of mania approaching. Just as in your favourite scary movie, however much you may want to hide behind the sofa, there is no escaping the inevitable.

Some of the songs sound like they've been recorded from two floors away whilst others sound like you're taped to the speaker. It's akin to being party to some ritualistic demon freeing exorcism where those around you speak in tongues and your mental state is either manipulated or altered accordingly.

Girl Band seem hard-wired to deliver incendiary, feral and unflinching music. It's frantic and hysterical, tormented and barely restrained but within its brutality is something challenging and creative that fuses all the noise together to make one hell of a sound. Not only are some of the songs extremely effective in their entirety but there are also some fabulous individual touches on 'Holding Hands With Jamie'. Daniel Fox's bass lines, Alan Duggan's blistering guitar, Adam Faulkner's, Budgie like, drums and Dara Kiely's possessed voice all contribute in their own right.

'Holding Hands With Jamie' is certainly a terrific and innovative introduction to a band on the cusp of breaking through. It's a no holds barred wake up call full of ferocious intent and unnerving energy. Dublin's long list of influential bands just got bigger with Girl Band.