For every 100 albums of bland synthpop or boring ballads, there will be one mind-alteringly weird release that harpoons through the banal sludge like an ice breaker making light work of the Pacific garbage patch. The oceanic references are deliberate: indie newcomers Krill are one of a kind and their album 'Lucky Leaves' is a journey through the vortex of strange. 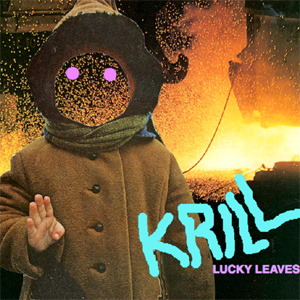 The claustrophobic record is redolent of small Bostonian fishing towns, and filled with the troubles and passions of youth. Bookended by 'Theme from Krill' and a reprise, in which the band's name is shouted repeatedly, 'Lucky Leaves' reaches its stride with the awkward and unsure 'My Boy'. Angular, off-kilter guitar has become a trademark by this point and carries a song filled with comfort for an emotionally-insecure friend.

'Oppressor' is the jolliest of the 12 tracks, yet is laced with the angst of returning to the past. "Every time I come home, I get into tiny funks", squawks Furman over indie twanging and perhaps the catchiest chorus of the lot. Lyrical themes range from the outright hilarious to the sorrowful and even self-loathing, as exemplified by 'Sick Dogs (For Ian)' with the declaration, "All he wants is to wallow in his own filth" and the 'Never a Joke' musing on how people can "make someone feel zero".

Dabbling at the edges of emo, but far to quirky and intent on goofing around to give it their full commitment, the introspective and oddball Krill will draw you into their manic-depressive universe, but you will find yourself having a pretty good time of it thanks to a blast of oddball originality that stirs like the fresh ocean air and makes 'Lucky Leaves' a joy to behold.