It probably seemed like a really good idea at the time, but Marconi Union's decision to go along with having their composition 'Weightless' being voted as "The Most Relaxing Song Of All Time" in 2011 is probably starting to chafe a little bit by now. 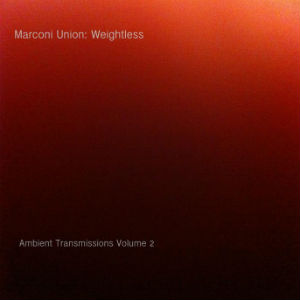 With that kind of recognition comes some fairly predictable pitfalls. The Mancunians - a trio now, since original members Jamie Crossley and Richard Talbot were joined a couple of years ago by Duncan Meadows - may, for example, have been less thrilled by the YouTube poster who subsequently looped the track into one continuous ten hour attempt at self hypnosis. To their credit, brickbats like that haven't, however, discouraged them from further refinements, coming in the form of this new volume of what appears to be on the way to a fully fledged Ambient Transmissions series.

Just to take a step back, the largely (accurate) cliché applied by critics to the "Ambient" genre is that it often resembles the sensation of being in a floatation tank of patchouli oil; the woozy, beatless pieces being the scions of a form originally known as "New Age" back in the 1970s.  Explored during that period by the likes of Brian Eno and Robert Fripp, it's continuing popularity is probably due to the hectic madness of our modern existence, or something, but this is a long winded way of saying that MU here will not 'Rock You (Rock You)' at any price.

Where this leaves the audience is dependant on either your ability to re-train the way you consume music or the degree to which you prefer it in the fore or background. Given attention and the right amount of headspace, some of these workings here are extraordinarily beautiful, especially the ocean side bells of 'Part 2' (each of the six pieces is assigned a part number instead of a title) and the ghostly piano of 'Part 5'. Nothing much happens, but what does is a long sequence of looped passages designed with meticulous care, each working in corridors of almost imperceptible refinement. Gratification is there, but it is not instant.

In much the same way as a painting will reveal different aspects of itself with repeated viewings, this is a collection of pieces that give up their secrets over repeated listens. It's in no way a conventional release, or one for Asda chill-out compilation mums, but what's reasonable to assume is that acolytes will find something to satisfy themselves with, whilst the knot of outsiders will be scratching their heads at the attraction. Ambient Transmissions by their alternate definitions will be either a meritorious diversion or an unnecessary indulgence. There is a case to be had either way.