Marcus Hernandez - If You Were Mine Single Review

Review of If You Were Mine Single by Marcus Hernandez

Marcos Hernandez
If You Were Mine
Single Review 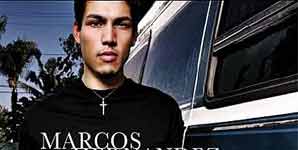 After splitting from a boy band who supported acts like Jessica Simpson and Mandy Moore, since then Marcos was picked up by Vanilla Ices' manager Tommy Quon and began work on his solo attempt with Ritchie Blaze who produced hits for veteran Dianne Warren. Although the vocals are a semi attempt of R&B, and only due to his Latin connection, I can't help think of bubble gum pop boy band 98 Degrees or another production line artist while listening to the track. It just lacks any emotion or originality.