Review of Reveries Album by Maribel

Atmosphere. It's a strange thing isn't it? Such a vital part of music, and yet it's not easily defined, or tangible. But then again when it's obviously lacking or synthetic (I'm looking at you: Lana Del Ray) people tend to sniff it out. As it stands, Maribel seem a band which exist solely to create it, and their second album Reveries comes over as dark and delicious as a stroll through a David Lynch film. 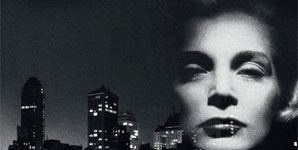 Based in Oslo, it seems fitting that their music is such wintry fare. Surfing and dirgy, but with a melodic lift courtesy of the dulcet tones of Rebekka Von Markstein, who now assumes lead vocals. The band has had various line-up changes since their first LP, not to mention the fact that one member now lives in San Francisco (surely a rather long commute to practice). But at any rate, their current line-up seems to make the best out of the talents they have, and the contrast between Von Markstein's beautiful pipes and the industrial clunk of the drums and bass makes Reveries a compelling listen. Fans of the old school shoegaze bands like My Bloody Valentine should be raising their heads in interest, but Maribel are perhaps better being likened to Autolux.

Reveries begins in gloomy detachment and suffers no sudden injection of mirth. The ghostly spectre of a pop song 'Falling Down The Stairs' begins with the moribund couplet 'Lay me down, Oh Lord, lay me down' layered over lurching percussion. It's pretty much the sum of Maribel's parts: the dichotomy of the sweet, hushed vocals at odds with the dark sentiments, but whilst their music doesn't stray far into experimentation, it does mean their tone affects with deadly accuracy.

Maribel excel at the creation of the uncanny: it permeates this album to the very core. Clearly familiar with Mark E Smith's version of The Three R's (repetition, repetition, repetition), they twist their lyrics until they become strange and foreboding. For example Slumber Street's 'you can follow me, you can call on me' sounds rather like an invitation to the grave rather than the natural more life affirming inference. The looping, nursery rhyme melodies that sweep over 'You Bring the Sadness' or 'The Devil's Sigh' are more than unnerving, and a creeping dread continues to hang over Reveries like a mist in a gothic horror film.

Indeed, the thematic repetitions and cohesiveness of Reveries make Maribel's music ideal for film noir - and as gathering numbers of rock stars swan off into scoring cinema, it seems this could be a cap that would fit Maribel. An enthralling, bewitching listen.