Georgia Gothic, Mattiel's third full length album, may well have taken shape in the secluded isolation of a wood cabin in northern Atlanta but it's anything but insular. Mattiel Brown and Jonah Swilley, the creative co-conspirators behind Georgia Gothic, have utilised their time together, on-the-road touring and again during lockdown, to deliver up their most accessible and immediate album to date. Georgia Gothic is infused with a wonderfully woozy 60's sound that permeates through to all 11 tracks on the new record giving the whole album a cohesive quality that begs you to listen to it in it's entirety. 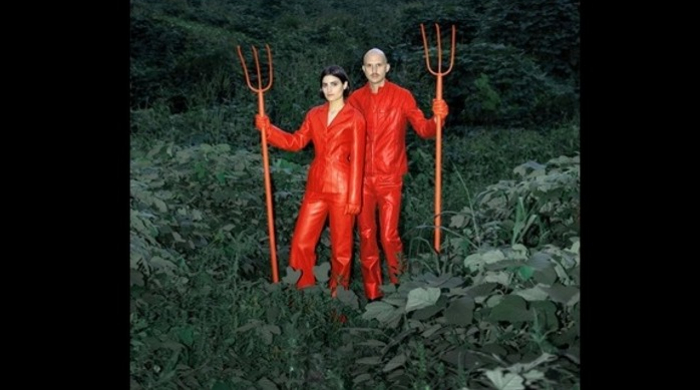 Mattiel's follow-up album to their second record - Satis Factory, has a more balanced feel and comes with softer, friendlier edges. On the whole the songs are less confrontational, more melodic and generally more commercial. The combined appeal of Swilley's inspired guitar work and Mattiel Brown's quivering vocal are more evident than ever. On Georgia Gothic Brown seems more relaxed and centred than she ever has. Some of the urgency and anger has been taken out of her delivery but the irresistible vibrato remains. Mattiel now sound less like a garage band and more like a polished power-pop outfit with their latest harmonious and considered compositions.

Georgia Gothic has already given up four fantastic singles, the first of which was last year's joyous lead track - Jeff Goldblum. The scuzzy guitar riffs combined with Brown's softer vocal stylings and some very well versed lyrics make this opening track on the album one of Mattiel's best ever songs. "I didn't take the time to listen to his name/So just for now, I'll call him Ichabod Crane/My Sleepy Hollow baby standing in the rain" has got to be one of the best lyrics from any song released last year (Discuss). Jeff Goldblum was inspired by lead singer Mattiel Brown's "very real" crush as she explained in a press statement at the time - "Well, my crush on Jeff Goldblum is very real. He inspired the words - but this is more of a dream where a Jeff look-a-like meets me in a bathroom. Nothing beats an 80’s Jeff Goldblum. Incredible looks and charm. If anything, I hope if he somehow hears the song, he loves it as much as we do."

The second single to be lifted from the new album, and Mattiel's first release of 2021, was the altogether different - Lighthouse. Talking about the single, Brown said, "We hope Lighthouse is a positive, uplifting song for anyone who hears it. If you’re working toward something and it feels like an uphill battle, that can be a sign that you’re headed in the right direction. And there’s always someone or something to help guide you through it". She says that it's "A safe refuge in a storm, or a place to rest before you have to go back out into the waves again".

Since they shared Jeff Goldblum and Lighthouse, Mattiel have subsequently released the delightfully strange Blood In The Yolk and more recently the ever so slightly funky Cultural Criminal which has echoes of The Kills in it's musical DNA.

Although Georgia Gothic has already given up four of it's 11 tracks as singles it still has plenty more to give, with arguably it's best track yet to be shared. The cinematic unfolding story of On The Run, the theatrical drama of Wheels Fall Off, the jazzy inflections of Boomerang and the up beat, toe tapping finale of How It Ends all contribute equally to the overall album.

Where Georgia Gothic gives up it's best however is on one of it's undoubted highlights - You Can Have It All. The shimmering slice of pure 60's psych-pop lifts Georgia Gothic to another level. Everything about this track works. The soundtrack is inspired; revolving guitar riffs, tight percussion, subtle instrumental additions, a sing-a-long chorus, hooks a plenty and a faultless vocal. If you could only take one track from Georgia Gothic it would have to be, ironically, You Can Have It All.

Brown and Swilley have taken inspiration from their home state as well as giving a full on nod to Grant Wood's iconic 1930 painting - American Gothic for the cover art of their latest album. The red leather clad, pitchfork holding couple present an arresting and compelling image that perfectly pairs to their equally compelling album.

Georgia Gothic may not be as leftfield, alternative or challenging as some of Mattiel's previous work but it is arguably better because of that. Each song is a pure power-pop delight that is fully formed and immediately engaging. (Credit should also go to Grammy award winner John Congleton (Phoebe Bridgers/Lucy Dacus/David Byrne/John Grant) who did a fabulous job of mixing the new album.)