No.9 - The History Of The Day Album Review

Review of The History Of The Day Album by No.9

A long-time entry on the seemingly endless list of begrudgingly talented solo artists from Japan who weave the classical with the futuristic and the acoustic with the electronic, the shadowy No.9 returns with his seventh album, one that is bursting with a childlike, wide-eyed innocence that belies his maturity. 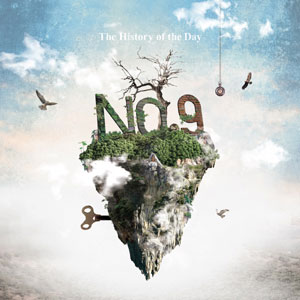 His palette is one that will be instantly familiar to the followers of his compatriot practitioners who conjure up the kind of irresistible folky/neo-classically/post-rocky/jazzy macro-genre that has never really been named, but the strokes and the contrasts that are used throughout paint a picture closer to that of the UK's Haiku Salut; more watercolour than post-modern and not afraid to be light-hearted and, indeed, ramshackle when the mood suits.

The atmosphere is at no point studious and the artists' technical wizardry, though apparent, is focused solely on creating enjoyment for the listener and not a vehicle for compositional muscle-flexing (not that this is a criticism that attempts to cast a shadow on the work of the likes of Worlds End Girlfriend and Kashiwa Daisuke, who admittedly only have the loosest roots in the same grounds as No.9).

So whilst there are several pieces that meander for a little too long ('There', a collaboration with fellow countryman Haruka Murakama being a chief culprit of this), there are plenty of sprightly titbits that will warm the cockles of fans of the early works of Takahiro Kido ('Inside Outside') and Aus ('Small Promise') whilst never feeling like a retread of these common signposts. Outside of Japan's borders, there are plenty of other reference points, and the rich tapestry of The History Of The Day from start to finish will surely garner several admiring glances from aficionados of Nils Frahm, Shugo Tokumaru, Efterklang and Jaga Jazzist alike.

At the centre of it all is the album's highlight, 'Before The Wind', which features a sighed vocal contribution from Chiyo that snakes around some of the snappiest percussion found on the album and warm synth motifs that would certainly not sound out of place on the latest Ninja Tune-released full lengths by Yppah or Bonobo. It is not a sore thumb in the middle of the rest of the album, however, as acoustic guitar plucks and crisp electronics bridge out to the elements that precede and follow it.

Though too human to be alien, No.9 has created another new world that is ultimately indescribable to those that haven't lived in it. So do so.