Review of Projections Album by Romare

There are times when you could hear an album blindfolded and then go, "Ninja Tune, that" in response to the "On which label has this been released?" question. 'Projections' is one of those releases. Archie Fairhurst took his stage name in recognition of African-American artist Romare Bearden, whose particularly striking collages bridged abstraction and the everyday, and were at the forefront of black cultural expression in the 20th century. 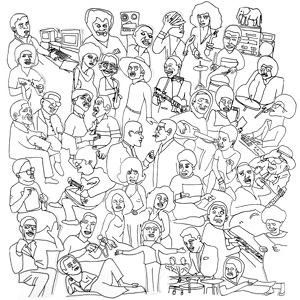 Comparisons between that approach to creativity - fitting different mediums together, constantly experimenting until clarity - and Fairhurst's sound are easy to make and, to an extent, based on this excellent album, entirely reasonable. 'Projections' is, in many ways, as close to an archetypal Ninja Tune release as it's possible to get given the label's maverick roster; a rolling smorgasbord of elements lifted from all corners of electronic music which celebrates rather than confounds its multi-dynamism. It's a good job this is true as well: this is a field, after all, which hardly lacks for producers with their low key beats and diffident timbres, but to everyone's credit there are plenty of fresh ideas amongst the familiarity.

Part of the battle with this kind of music is giving it depth and atmosphere. From the opening moments of first track 'Nina's Charm' though, Fairhurst/Romare demonstrates how to do more with less, refusing to over elaborate and whilst using a cluster of understated samples and psychedelic keyboard melodies, the underground oozes from every note. Can you dance to it? Well, that all depends on what you mean by dance. In theory, you could frug to the weebling deep house of 'Ray's Foot' - a bit like Toro Y Moi but with thicker glasses - or the jazzy weird-hop of 'Lover Man', but you'd probably end up looking like you were having a bout of sciatica.

Another one of the accusations frequently levelled at stuff like this is that of boffintronica, the my-MP3-crate's-weirder-than-yours syndrome. There are no such lapses into wilful obscurity here though, at least none that detract from the end product. On 'The Drifter' for instance, Fairhurst manages to make an off-cut, pseudo-blaxploitation soundtrack groove that's lower down and dirtier than anything we've heard in ages. That same fusion of ghostly, discombobulated voices and locked in notes makes 'Prison Blues' just as expertly fried, but 'Projections' is full of surprises and on both 'Roots' and 'Rainbow' it delivers almost without precedent a gorgeous funk workout (latter) and sweeping, slightly twisted Detroitisms in the vein of Carl Craig (former).

Maybe it's wrong to associate a specific set of non-specific qualities with a certain label. Maybe it would be time, if they were so stereotypical as to be ticked off, that the imprint in question would be tempted to cease and desist. But this is Ninja Tune, 'Projections' is great, and the world would be an even worse place without them and tunes like this. So come on baby, blindfold us one more time.