'More is Less' is perhaps the perfect way of describing Silent Front's upcoming album 'Trust', due for release in early February. The band's second album, following from their 2010 debut 'Dead Lake', is the finest example of pure, abrasive, math-rock in recent years. Listing Dazzling Killmen & Fugazi among their influences, 'Trust' represents a throwback to the hardcore punk sound associated with the 80's and - when the band was originally formed - the 90's. 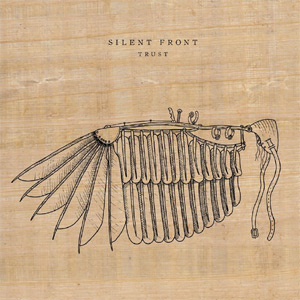 Typically, music within this genre of 'hardcore punk' is described using the typical three associated A's - 'aggressive, angry, angsty'. Though it does indeed have this typically stylised aggression, the first thing that eventually sprung to mind was an idea of 'controlled chaos'. 'Friend or Foe' displays this perfectly; the constant screeching of the guitars, the thundering of the drums and the growling vocals clash together to form a uniquely choreographed ataxia, flowing with startling precision, staying true to the 'classic' punk sound of previous decades. Along with 'Friend or Foe', 'Bracken' is also one of the strongest tracks on the album, with the dystopian lightning riffs enough to please even the most hardcore of guitar music fans.

Often with music like this, it is an easy criticism to suggest that each jam sounds completely identical; however, this is certainly something Silent Trust cannot be accused of. 'Confiance' - placed strategically in the middle of this eight track album - illustrates the bands ability to mix things up a bit, providing a six minute, utopian sounding, purely instrumental contrast to the preceding four songs, sounding startlingly hopeful and mellow in comparison. This dip into the instrumental isn't a one off either, as the albums final piece 'Veil' ending with a thirty second footnote of cheery riffs and drum beats, further adding to the refreshingly unique sound of the record.

Though not for everyone, fans of the old school punk sound will love this record, which could easily sit alongside, and measure up to, any hardcore punk album from the 80s and 90s; Trust' is an album which will keep you coming back for more and will give you something new with each hit of the replay button. This will certainly take a 'mechanical grip' over your music players. Enjoy.