Review of Rum and Brass Album by Stig 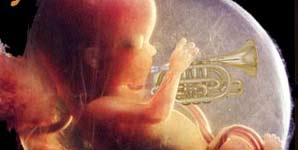 This band can't be accused of being half-hearted. A thrashing, scathing, bitterly comic ska punk band with plenty of guts, a whole lot of trumpets and lyrics like 'Stars and stripes on all things hideous'.

With uneasy drum beats, dense punchy guitars, a mesh of brash instruments and hoarse screaming vocals, you can't help but feel like you are being pummelled by noise.
It is, however, an unpredictable punch up, the music never quite going where you expect it to. I feel this is a real plus point, as all too many punk bands stick to the same tired formula, thinking a few anti-capitalist rants will make them interesting.

The guitars veer from really heavy trash punk, to up beat and bouncy ska riffs, at times even morphing into soft flamenco. On one track the brass section sounds like the run up to a cowboy showdown somewhere in South America.
There is a whole array of different instruments and samples in here, creating an interesting patchwork of sound that draws the listener in.

The vocals are the one constant throughout. They remain course and strident with lyrics, like the music, that seem to be lots of different pieces strung together, random words that either make sense or not at all. But you get a sense that some ones pissed off about something.

Unfortunately it feels like something of a cliché these days to reel off disconnected and vaguely anarchic sentiments that are often portrayed in punk music. Perhaps it is a lack of subtlety that makes it loose its impact, or perhaps it's the fact that it all too often sounds as though its being said because 'that's what punk bands do'. Take Sum 41 as the worse example I can think of. But still, at least music is being used to discuss real issues, however nonsensical they may be.

Despite this, Stig do manage to create a sound that is both relatively fresh, and familiar. Music to get riled up and jump about to, even if you have to mosh with the big blokes.