The Czars - The Best Of The Czars Album Review

Review of The Best Of The Czars Album by The Czars

March 3rd, 2014. Performing on the David Letterman show in New York, relatively unknown quartet  Future Islands deliver their new release 'Seasons (Waiting On You)'. Some aspects of the display  are remarkable: lead singer Sam Herring gyrates like a brunette William Shatner at a birthday party, gilding the lily of an otherwise pleasant but not ground breaking song by intermittently shredding as if his life depended on it. 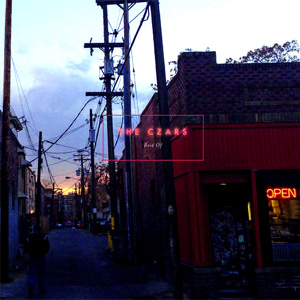 The effect was cathartic. The piece has now over 3 million YouTube hits, whilst the previously anonymous band were suddenly whisked from off the toilet circuit they'd spent the previous 8 years grinding through to festival and headline slots they'd surely only ever have dreamed of previously.

This moment never came for The Czars, a band from intemperate, conservative and unfashionable Denver, despite the critical hosannas that came the way of their music from time to time. Their career went familiarly the way of those who receive more stars in reviews than they sell records: a tiny niche group of people fell in love with their rusty alt. country ballads - and the honeyspun voice of singer John Grant - whilst the music industry waved them by. Supported by Simon Raymonde's Bella Union label and personally by Raymonde himself, working gratis as producer, they created ripples but disintegrated in 2004, Grant soldiering on briefly before gradually beginning the process that would eventually make him a much treasured solo artist of now.

It's extremely unlikely that we'd ever have seen this compilation without Grant's ascension to the world stage, and the singer himself with usual brutal honesty maintains that the listeners could've managed one decent album from the five they made. This then, is it. Culled from the Bella Union releases, this plaintive, bittersweet collection of songs is the work of a band who were as insular as they were gifted, on which Grant's voice, forever his personal bête noire, is beautifully vulnerable.

No-one comes from nowhere of course, and there are traces of Grant's future promise already amongst these songs like grains, particularly on the sombre austerity of 'Drug', or the exquisite starkness of 'Anger', either of which take the singer-songwriter form and give a lie to accusations of cliché. Whilst that's possible to see with hindsight, this isn't the work of group in name only, and on the likes of 'Killjoy' and 'Side Effects', a more immersive, muscular dynamic emerges that leads down another avenue, one which here anyway remains uncharted.

For Grant though, it seemed like he was always in the wrong place at the wrong time. Professing a love for the seventies which would become pronounced later on 'Queen of Denmark', the inclusion here of Abba cover 'Angel Eyes' is as prescient as it's welcome. When later he would become similarly beguiled by quixotic mystery of the 4AD label (A fascination that led to seeking out Raymonde), Czars would choose to bravely attempt an inevitably flawed version of the label's signature track 'Song to the Siren'. Either of these would be an apex moment for many groups, but here the kiss off lies in the bleeding hands of 'Concentrate', a dissonant, spectacularly tender ballad which narrowly eclipses the rest in terms of heartbreak and amplified melancholia.

Like thousands of other bands, The Czars' 'Waiting On You' moment never came, be it through bad timing, bad luck or bad habits. Grant's subsequent career has taught us that his loss to drug addiction and worse would've been a tragedy, whilst this collection reveals the band he looks back at with faint praise as ones which deserved at least their 15 minutes.