Review of Grown Ups Album by The Lodger 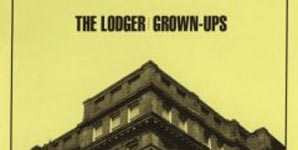 'Bedsit Indie'. There can't be many more phrases to immediately divide opinion between fans of alternative music; for each sensitive soul more than happy to wallow in a fey mire of 80's floppy-wristed girlfriendlessness there exists an equal and opposite individual who can think of nothing better than beating Morrissey to death with his own gladioli.

First impressions suggest West Yorkshire three-piece The Lodger sit firmly in the former category. Songwriter Ben Siddall has patiently crafted a set of tunes harking back to the days when a chiming guitar and wry lyric bemoaning one's status as an outsider would draw the crowds to the indie-discos and anorak cities. Even the band's name acts as a giveaway, with its echoes of 'that quiet young man upstairs, he never leaves his room but to go down to the record shop'. But is there more to this LP (yes, let's call it an LP for old times' sake) than jangling observation?

The choice of title is important to the tone of the record - whilst "Grown-Ups" may initially suggest a certain maturity, it's a phrase used primarily by children and as such hints towards looking at adulthood from a young perspective. Rather than the mardy bums and ASBO monkeys thrust into the limelight in recent years with their explicit songs of youthful folly however, these songs are instead imbued with an older heart's nostalgia for a time when small-town adolescence was less complex. The callow teen introduced at the start of 'Bye Bye' could easily be a character from Gregory's Girl, eager to sample first kisses without the cynicism that comes with age; there's a similar hint of Bill Forsyth behind 'A Free Period''s fusing of every sixth-former's favourite time of the schoolday into a metaphor for relationship issues - bolting on one of the best shout-at-the-top-of-your-voice choruses you're likely to hear this year in the process.

Growing up a few years, the kitchen-sink vignette of 'Simply Left Behind' now sees hearts broken left and right - the narrator is not the only one falling "in love with all the idiots who use me up and spit me out again" whilst observing the inevitable consequences ("I've been rooting for you all throughout / but there's only one way it could end [...] happy endings just aren't your thing"); Siddall's repeated "no" leading into the chorus hangs breathlessly over the song like so many unresolved conversations.

This album is not all about girl trouble though - Siddall has saved a good slice of lyrical vitriol for the "copyist people" and scene leeches that populate local venues. The hyperventilating contempt contained within opener 'Many Thanks For Your Honest Opinion''s sneering "You're right, you're right..." refrain is expanded deliciously during the slower 'Unsatisfied', as "beautiful things hang with beautiful twins, [...] what are you wearing? I'm almost past caring". Siddall is torn as to how to react during 'Getting Special' - whether to "sit in my bedroom for the rest of my life" or to get out there as an individual, ready to get knocked down ("I just want to be a peacock, but I don't think it's allowed").

It soon becomes staggeringly evident that there's not a weak song on the LP - the band's intuitive knack for a hook is displayed across all 14 tracks, with 'Kicking Sand' and 'You Got Me Wrong' in particular prime examples of effortless pop. Even the less substantial 'My Advice Is On Loan' hits home with a knowing self-awareness - "I can't explain why I live in a bedsit like I have no shame". Meanwhile former single 'Watching' is a thrilling reminder of where those Wedding Present comparisons came from - still with Siddall's thoughts focused on the inescapable influence of his past ("It's great when you are just 19 but certain things can stop you dead, like where you're born and where you're led")

As with Gedge's indie icons however there is a certain degree of sonic inflexibility throughout the disc; nevertheless there are moments when the telecaster strumming and sparkling arpeggios take a back seat. A James Ford-mixed, disco-tinged 'Getting Special' postively bodypops in sequenced rhythms, sounding for all the world like Graham Coxon in chestwig and flares, while the muted horns underpinning the chorus of 'Let Her Go' hint towards the sombre brass band relics of a northern mining town.

While these songs are pristine two- and three-minute pop gems (even the band's traditional set-closer, the gorgeous mini-epic 'Not So Fast' clocks in at a mere 3:24), it's fair to say that penultimate track 'Bye Bye' comes as a huge surprise; at six and a half minutes the longest song in the band's recorded canon by a significant margin, it swoons gracefully with end-of-the-pier glitterball wistfulness as Siddall recalls the girlfriends of his less complicated formative years with fondness before sending them back as inflexible fossils of the past - "what did you do with your lives? There's an albatross around your neck but where the hell did you expect I'd be now... five years on, six years on, seven years on?" A truly sublime John Barry-esque chord sequence during the instrumental bridge raises the song into the stratosphere, though it's more than a little perverse that the jaunty 'Let's Make A Pact' prevents the song from taking up its rightful position as the album finale - as it does on the Japanese version of the record. That's a minor quibble though, as 'Grown-Ups' is undoubtedly one of the strongest sets of pop songs you're likely to hear on one record for many a year. It may have taken them a few years to finally get here, but offer The Lodger a home in your record collection and there's a good chance they'll take up permanent residency on your stereo. It's quite simply outstanding.