These days, to get ahead in the dog-eat-dog world of entertainment you need to be an all-rounder. Whinnie (real name Jade) Williams has to her credit realised this and as a result has been collaborating with Professor Green, doing her own mixtapes and recording a song called 'Chav @ Heart' which we're almost ashamed to say is far better than something with a title that crass deserves to be. 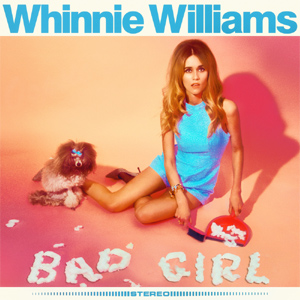 Styled with more than a hint of Barbarella-era Jane Fonda on the cover, 'Bad Girl' sees Whinnie delivering vocally on the quartet of songs in the style of Estuary warbler Lily Allen, adopting that familiar air of watching nail varnish dry. Not that all of this affectation - she was born in metropolitan Hertfordshire - is a bad thing; on the EP's whopper 'Oopsy Daisy' it's all part of a tapestry that uses MOR schmaltz to render her character as a Jejune laddette, albeit a loveable one. It helps that it's also as addictive as it's sugary, three minutes of character pop bullseye that deserves a lot more love than it's received so far. In a similarly louche mould, opener 'Don't You Love Me''s tongue remains firmly in its unrequited, retro cheek, whilst on 'Break Hearts In Your Sleep' the boot is sort of on the other foot, the whole thing by now sounding like a sort of Lucius if they shopped at Aldi and never had any credit for their phone.

There is a weird (ish) back story here: as a teenager, our Jade worked at a pet shop where completely the opposite of 'Cheers', nobody knew her name, so her colleagues ended up calling her just Sunday Girl. Well, we never. Anyway, the final song 'Stupid Things' is the odd one out, chucking away the chintz, leaving WhinnieJade and just a guitar to crow soulfully about letting the one go, more basic territory on which she sounds much more comfortable and capable. Sunday, Bad, whatever: WW is a girl who needs to show she can match the hard work with talent before more doors will open for her.