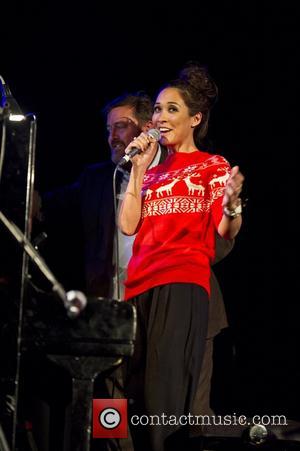 Picture: Myleene Klass and Guy Garvey (lead singer of Elbow) performing together at the 'Save the Children's Christmas Tree Sessions' at Union Chapel London, England -...

Somehow, Myleene Klass' career is still alive, sort of. Believe it or not, Heart have handed her a special Christmas show, in which she can have special guests come in for a Christmassy chat and some mince pies, The Mirror reports.

"I'm so excited to be joining the Heart presenter line up," Klass explained of her new show, Myleene's Klass Christmas (wow). "To be given my own show, a piano and the chance to work with some incredible people (as well as the seemingly constant supply of mince pies), is a lovely way to get in the Christmas spirit," she continued. Clearly a fan of The X-Factor, Klass has elected the prematurely ejected Ella Henderson as the first guest on her brand new project. Deemed an 'incredible' person by someone who is yet to prove that of herself, Henderson was considered to be an X-factor favourite before her shock eviction from the show.

James Arthur - the eventual winner of The X Factor - has been hitting the headlines for a very different reason. He's been mixing it up with ex-winner Matt Cardle, saying, "the blokes that have won before have had a niche, they haven't sold records because they haven't made great albums. That's the bottom line." To which Cardle hit back, saying, "I said, 'Look, James, you're very talented but you haven't sold two million records yet, which I have,'" Matt said, humbly taking his Mother Theresa costume out of the wardrobe and pulling it on while recounting a conversation which may or may not have taken place in his head. "You haven't had two top ten albums yet, which I've had. Don't start mouthing off before you've even really left the show."