British Pop-star-turned-tv Presenter Myleene Klass' Divorce Has Turned Ugly After Her Ex-husband Accused Her Of Blackening His Name And Refusing To Allow Him Access To Their Children For More Than A Year. 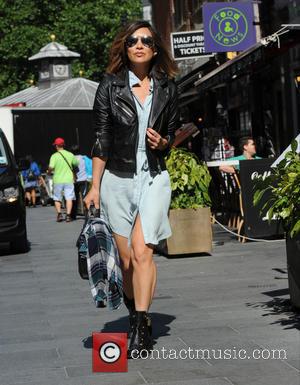 Graham Quinn walked out on the former Hear'Say star on her 34th birthday in 2012, just six months after they wed, and he was later reportedly awarded $2.9 million (£1.8 million) as Klass had signed no pre-nuptial agreement.

She spoke out over the weekend (18-19Jul15) to insist the financial settlement had put her off ever marrying again, telling Britain's Daily Mail, "I'm talking about when a guy can take (your money) off you. I'll never let that happen again, so help me God. If I'd decided to gamble with my money, I could take that, but someone taking it... no. F**k! I'm never getting married again. Never."

The comments have prompted Quinn to launch a furious tirade against his ex on Twitter.com in which he accuses her of lying about him to garner publicity and stopping him from seeing their two daughters Ava, seven, and Hero, four.

In a series of messages aimed at Klass, he writes, "Thank you for once again slandering my name in the papers to promote yourself, it's frankly embarrassing and complete lies... I've stayed quiet for three years now but enough is enough.

"Please explain to me how I took your money? I lost so much money from our divorce and our house that we bought together... and further money from me fighting you over letting me be a father to my kids whom I haven't seen in over a year... shameful. One day I hope you will put the interests of your children first and let them see their father."