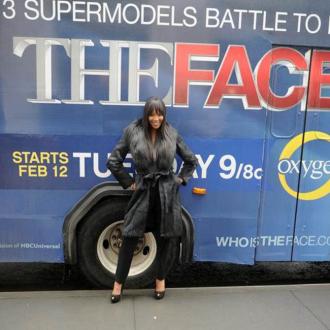 Naomi Campbell has never struggled with her weight.

The 42-year-old British supermodel - who mentors aspiring models on new US TV show 'The Face' - has never had to rely on diet or exercise to stay slim and she loves to eat good food.

She told People.com: ''I don't really know about weight or age. Weight was never something that was part of my time and I worked everyday. I've never struggled with weight and I think food is pleasurable.''

But she admits she is ''still blessed to be working'' in such a competitive industry and thinks up and coming models need to be prepared to stand out to get noticed as they have a lot of competition from actresses when it comes to landing campaigns and magazine covers.

She said: ''You're up against a lot of girls going for the same job, and they only want a selected few, so you really do have to have something outstanding to catch their eye. In general the world is more competitive these days and there is no real preparation, so it's definitely harder to book the cover of a magazine. It's definitely harder to book in advertising, because they don't just use models anymore.''

Naomi previously admitted that she initially felt uncomfortable at the thought of being on camera, as she has always been keen to protect her privacy.

She said: ''I always said I don't want to do television because I was afraid of it, to be honest, and what the fear was, [was] that I had tried to live as privately as I [could] so I didn't feel it would be in my comfort zone to have a camera following me around.

''But this was a whole different thing. It's not that way at all. It's me getting to share 26 years of what I have been blessed to learn and know and find out about and achieve, with girls who want to be in our business and that's far more fun.''

At the height of her career, Naomi - along with Claudia Schiffer, Linda Evangelista, Cindy Crawford, Christy Turlington and Kate Moss - was regarded as a 'supermodel' but she dislikes the term, and believes it is now overused in reference to current ''working models''.