Naomi Watts would like to have another child but only if she could guarantee a sister for her two sons. 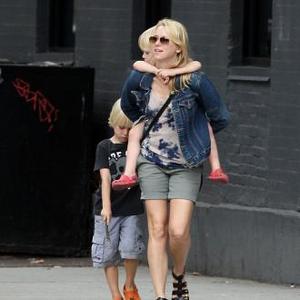 Naomi Watts will only have another child if she can guarantee it will be a girl.

The 43-year-old actress - who has sons Alexander, five, and Samuel, three, with her partner Liev Schreiber - enjoys taking her kids with her on trips around the world but does find having two boys stressful, and would only have a third child if she knew it would be a daughter.

She said: ''We try to turn our trips into a big adventure and not just hang around our hotel. I think children can have a more valuable education at their age by seeing the world as opposed to sitting in a room playing with blocks and finger painting.

''Two boys can be a lot to handle and sometimes you think it would be easier with two girls playing with their teas sets and dolls. But Liev loves having two boys.

''I suppose I might consider having another child - if someone could guarantee me it would be a girl.''

Naomi left having children until later in life - despite initially wanting them in her 20s - as she decided it would be best to have an established career first.

In an interview with The Sun newspaper, she said:'' I always wanted to have children when I was in my early 20s. Then, when I was living in Los Angeles, it was a question of trying to survive in the business and I wasn't in any state to even think about family. I also thought that I needed to establish myself in life and gain more wisdom and self-awareness.''