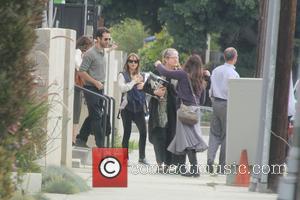 Natalie Portman has been spotted with her son and fiancé for a weekend outing. Natalie Portman was joined by her fiancé Benjamin Millepied and son Aleph for an outing in Santa Monica on Saturday (14 Jan 2012).
The 30-year-old actress showed off her seven-month-old boy in a baby carrier as she joined family and friends at a local religious service. Portman was also seen earlier this week, proving that she has bounced back in shape after her recent birth. According to the Daily Mail, she showed off her slim legs in a floral dress this week when running errands in Hollywood. Portman was spotted at a farmer's market in Los Feliz checking out the local produce, joined again with her fiancé and son. Portman is doing the rounds it seems as she will be joining many stars who are hitting the red carpet at the Beverly Hilton hotel for the Golden Globes tonight (Jan 15 2012). She will be joining fellow presenters Brad Pitt, Mila Kunis and George Clooney in presenting trophies.
It was recently claimed that Portman is considering shooting a documentary about veganism, turning Jonathan Safran Foer's novel 'Eating Animals' into a film, whilst also starring in the Wachowski Brothers' sci-fi movie 'Jupiter Ascending' as her first post-baby film, set for release in 2014. The movie is set to begin production this autumn.