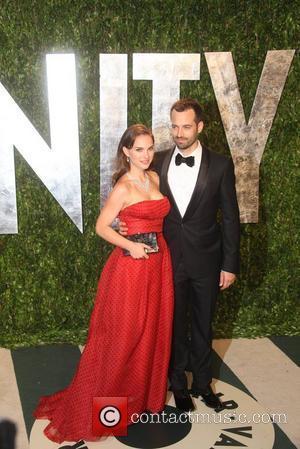 Natalie Portman appears to have secretly married her fiance Benjamin Millepied. Both Natalie and her beau were pictured at Sundays Oscars ceremony (February 26, 2012) wearing "what appear to be wedding rings," reports the Huffington Post. Natalie Portman - herself an Oscar winning actress - presented the award for Best Actor, to Jean Dujardin and the ring could be clearly seen next to her engagement ring. Neither Natalie or Benjamin had announced any details of a wedding to the press.
Portman and Millepied met on the set of Black Swan. Natalie Portman played the role of Nina Sayers and won the Best Actress Oscar for her performance. Benjamin played the role of David / The Prince - Nina's onscreen dance partner. They started dating in 2010 and in December of that year, announced that they were engaged and expecting their first child. Natalie gave birth to their son Aleph Portman-Millepied last year.
Natalie Portman is scheduled to appear in the 2013 production of Lawless alongside Ryan Gosling and this year's Oscar-nominee Rooney Mara. The film, directed by Terrence Malick (The Tree of Life) is a story of sexual obsession, focusing on two love triangles that intersect. She will also feature in another Malick-directed movie, Knight of Cups, starring Christian Bale and CATE BLANCHETT.