Actor Nathan Lane Broke Down In Tears As He Accepted A Prestigious Career Achievement Award From A Top U.s. Theatre Company This Week (Beg13apr15). 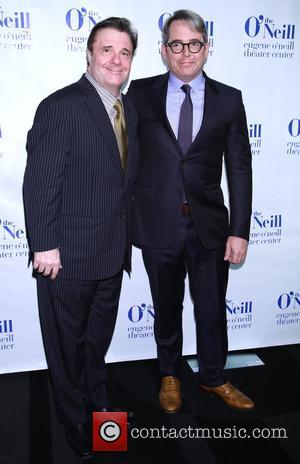 Picture: Nathan Lane and Matthew Broderick - A host of stars were snapped as they arrived to the 15th Annual Monte Cristo Awards which were held...

The Birdcage star picked up the Monte Cristo Award from the Eugene O'Neill Theater Center during a ceremony at the Edison Ballroom in New York City on Monday (13Apr15), and he became emotional as he took to the podium.

Lane fought back tears as he told the audience, "(This is everything) you hope and pray for as an actor," before quipping of his lifetime achievement award, "It's not that I don't appreciate the gesture, it's, as Hillary Clinton might say, 'I'm not quite done yet.'"

Previous recipients of the prize include Meryl Streep, Michael Douglas and Kevin Spacey.