The rumours are true as The Wanted's Nathan Sykes and American singer Ariana Grande confirm they are dating via their twitter accounts. 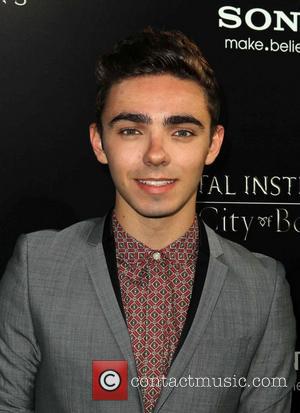 The duo who teamed up to record the love song 'Almost is Never Enough' decided to take the next step and go public with their relationship after being spotted on a romantic trip to Disneyland.

The singers first met when they teamed up to record the soundtrack for fantasy movie 'The Mortal Instruments: City of Bones' earlier this summer (2013) which led to a steamy music video for the single, where the duo were getting very intimate with one another.

Rumours first began to circulate of the couple being an item about a month ago in August, and finally they have revealed the truth via their twitter accounts.

The British singer posted "So, I guess it's obvious now . ?? thanks to everyone who is being so lovely. I'm so happy ?? #butweareterrified #pleasedontkillme #orariana".

With Grande adding "we hesitated saying anything as people can be a bit insensitive but thank u ? we value all of your happiness, thank you for valuing ours ??:)"

It was rumoured that Canadian megastar Justin Bieber was interested in pursuing Ariana, but the British lad seems to have beat him to it.

'Almost Is Never Enough' was well received by critics with Grande demonstrating her impressive vocal range and control in the love song.

It was added to the soundtrack of adventure fantasy-film 'The Mortal Instruments: City of Bones' which hit theatres this past summer on 21st August 2013, to a very negative reception.