Glee Star Naya Rivera Has Become The Latest Pregnant Celebrity To Bare All For A Revealing Photoshoot. 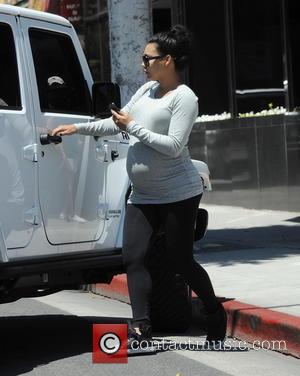 The actress and her husband, Ryan Dorsey, are preparing for the arrival of their first child this autumn (15), and Rivera now has a keepsake of her pregnancy after posing naked for Yahoo! Style.

In one shot, the mum-to-be is completely naked, using only a long fur stole around her shoulders to cover her breasts as she cradles her baby bump with a hand.

And Rivera tells the website that while she's proud to flaunt her pregnant body, she does find it concerning that celebrities in particular are examined more closely than other expecting mums around the world.

She says, "Being in the public eye when you’re pregnant is really, really hard, and people can be so mean on the Internet, it’s insane. Pregnancy is such a beautiful time to me, and I feel like you should embrace your body in whatever stage it's in.

"So it’s kind of hard being an actress, being a celebrity, and having people scrutinise how you physically look, and just saying the craziest things... I just keep in mind that I've never met these people, and they've never had the privilege of meeting me, so they're, like, strangers as far as I’m concerned. So you can’t really take what they say to heart."

The release of Rivera's nude photo comes after another mum-to-be, Kim Kardashian, fired back at body critics by posting a naked selfie of her own baby bump on Instagram earlier on Tuesday (11Aug15).

Kanye West's wife also attacked the trolls who have accused her of faking her pregnancy just to hit the headlines.

Pregnant stars who have bared all in photoshoots include Demi Moore, Jessica Simpson, Miranda Kerr, Britney Spears and Christina Aguilera.