Neil Young Teams Up With 'Silence Of The Lambs' Director 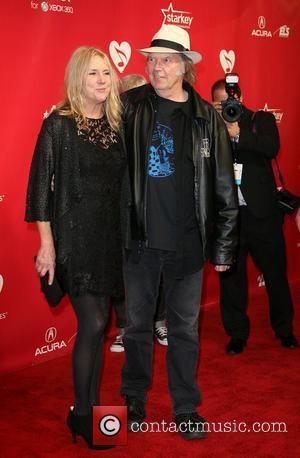 Neil Young has received rave reviews for his new documentary 'Neil Young Journeys', by American filmmaker Jonathan Demme - the man best known for directing 'Silence of the Lambs'. The new movie is based around Young's final performances in a solo tour that wrapped up at Toronto's historic Massey Hall - the scene of the sing-songwriters most famous concert.
Documentaries have always been Demme's passion, despite gaining critical acclaim for 'Lambs', as well as the more recent 'Rachel Getting Married'. He directed the classic Talking Heads concert movie 'Stop Making Sense' in 1984, shooting the band's three nights at Hollywood's Pantages Theatre. The Los Angeles Times put 'Journeys' amongst the top concert films, saying, "The show and the film end with an electrifying version of "Walk With Me," Young pacing the stage, guitar screaming before it cuts to silence, broken seconds later by wild applause. This alone makes "Journeys" worth taking". Claudia Puig of Usa Today heaped praise on the film, saying, "Neil Young Journeys underscores the continuing relevance of Young's artistry over the last 45 years and why he is regarded as one of rock's most influential musicians and songwriters". Peter Travers of Rolling Stone magazine said fans of the veteran singer-songwriter would be more than pleased with the movie, saying, "Journeys, shot on the last two nights of Young's 2011 solo world tour, is essential Neil Young".
Young released his 35th studio album earlier this month. 'Americana' reached No.4 on the Billboard 200 Chart.