Review of 5.0 Album by Nelly

Guess who's been top of the Billboard charts more than any other rap group or artist? It isn't Tupac, or Eminem, or Lil Wayne. It isn't Outkast. It isn't, despite the hullabaloo surrounding his new record, Kanye. The answer, as close observers of this review's subject matter may already have guessed, is Nelly. Nelly! The guy who did 'Country Grammar (Hot...)', 'Hot in Herre', 'Dilemma', and then...not much of note. Despite more or less slipping off the pop culture radar recently, and despite seeing each new release receive distinctly ambivalent reviews, Nelly recently hit number one again in America with 5.0's first single, 'Just A Dream'. It was his fifth number one, a statistic which seems faintly ridiculous when you consider how low his profile is compared to many of his contemporaries. He's very rarely grabbed headlines for doing outrageous things. He's just continued to exist and continued to make ridiculously popular music. 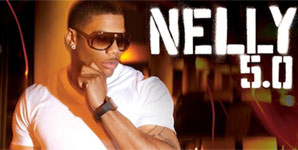 'Just A Dream' itself is a slick piece of pop-hop, full of cheerfully shallow sing-along moments ('If you ever loved someone put your hands up!'). The chorus is so cheesy and over the top that I'm willing to bet the video features a camera continually swooping around Nelly as he pulls a crucifix pose, topless, in a number of exotic locations, including a Miami beach and a hilltop somewhere in Brazil. I've never actually seen the video, but I'd stake money on this. It's a completely substance-free song, but it achieves exactly what it set out to achieve and does so with some aplomb. There are better moments on 5.0 though, such as the strangely compelling 'She's So Fly', a song which addresses Nelly's favourite themes, girls being hot and Nelly liking hot girls.

'She's So Fly' features a neat turn by T.I., far and away the most impressive guest star here. Nelly is a compulsive collaborator (a number of his previous hits have prominent verses by other rappers), but on 5.0 this approach goes wrong more often than not. Its nadir is an appalling, half-arsed cameo by Diddy, who Nelly inexplicably and hilariously refers to continually as 'Puff', a nickname he hasn't used for the best part of forever. I suppose it's to Nelly's credit that he's been paying even less attention to Diddy's career than the rest of us. This obliviousness to current trends is also apparent during 'Gone', his second collaboration with Kelly Rowland, who older readers may remember was once in a band with Beyonce. It's an inoffensive track, but it's not as catchy as 'Dilemma'. Most of the other tracks are similarly bland, never doing anything horrifically wrong but not doing enough right either. Controversy fans may find something of interest in Nelly's continued devotion to talking rubbish about women (all of whom, it would appear, are hot, or money-grabbing, or both), something which got him in trouble after he recorded the wondrously silly 'Pimp Juice' ('Pimp juice, ooh ooh ooh/I just need to let it loose'). You'd have to be very easily outraged to get upset about 5.0, though - most of the time, it's just too shrug-worthy to arouse any strong emotions.

Nelly isn't as outrageous as Lil Wayne, as inventive as Kanye or Outkast, as funny as Eminem, or as iconic as Tupac. His new record isn't exceptional in any way; it's a functional collection of poppy hip-hop songs. I doubt that Nelly cares about that though, and he won't care that 5.0 merits another set of mediocre reviews. He'll just go on being massively, inexplicably successful.