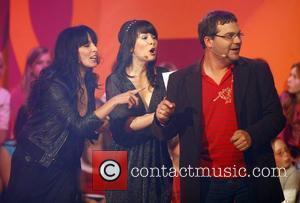 German pop star Nena is a glamorous grandmother - the singer has welcomed her first grandchild at the age of 49.
The 99 Red Balloons hitmaker's 19-year-old daughter Larissa gave birth to a baby girl on Christmas Day (25Dec09).
But the musician is adamant the newborn won't tarnish her rock star credentials - insisting the child is the "greatest Christmas gift".
In a statement on her official website, the singer writes, "My daughter Larissa brought a beautiful girl into the world on December 25, 2009. The baby is healthy and was born peacefully at home and is called Carla Maria. We are all thrilled about the greatest Christmas gift."
Nena - who hit the top spot around the world with her 1984 rock ballad - has three other children, Sakias - Larissa's twin - as well as 14-year-old Samuel and Simeon, 12.