First-time filmmaker Daniel Ragussis takes an unusual approach to this thriller. Since it's based on a true story, he avoids the usual cliches and formulas, which makes it an unusually thoughtful film. On the other hand, this means that it lacks the excitement we expect as events spiral into some extremely stressful situations. Instead, the film relies on underlying tension, strong thematic resonance and another committed performance from Daniel Radcliffe.

Radcliffe plays Nate, an FBI agent who is a bit of a loner, teased by his colleagues for his nerdy lifestyle. But this is what his superior Angela (Toni Collette) notices about him, and she thinks he'd be perfect for an undercover assignment infiltrating a neo-Nazi group that might be planning a horrific terrorist bombing. So Nate shaves his head and studies up on the white supremacist cause, befriending a racist skinhead (Seth Numrich) and his trigger-happy pals, then meeting their leaders Gerry and Andrew (Sam Trammell and Chris Sullivan). Nate's main target is the underground radio broadcaster Dallas (Tracy Letts), who is stirring up his listeners by channelling bigotry into conspiracy theories. Is he the one planning to explode a dirty bomb somewhere in Washington DC?

The film has a dark, gritty tone that remains internalised all the way through, focussing on Nate's perilous job: if he betrays his true feelings about these reprehensible white-power ideals, it's more than likely that these men will kill him. Radcliffe is excellent in the role, quietly convincing these thugs that he's committed to the cause while still maintaining his friendly, helpful personality. Since there are no women in the movement, it's great to have Collette in such a pivotal, powerful role. Angela is a feisty blast of energy in the film. And Letts is also remarkable as a man whose complexity deepens the more we get to know him. In many ways he's the true villain of the piece, encouraging hatred among his vulnerable audience.

Nate Foster is a young FBI agent who's selected to go undercover and infiltrate a group of neo-nazi thugs. The right-wing terrorist group is constantly planning and scheming to cause chaos and hurt anyone who doesn't fall into their supremacist society.

Nate's never been the most outgoing agent, mainly working on desk duty but when his superior agent asks him to begin field duty he doesn't quite understand just how deep he'll have to go to make a case against the terrorists. As he becomes a more embedded in the group, Nathan realises just how dedicated to their cause these people are.

Nate must remember who he truly is whilst trying to trick his new allies into thinking that he's one of them. As ideas evolve and plots begin to emerge, Nate realises the extent of their next mission and possible destruction it will cause.

Nestor Carbonell and Marco Carbonell - A variety of celebrities were photographed as they arrived for the world premiere of Disney's 'Tomorrowland' which was held at the AMC Downtown Disney 12 in Anaheim, California, United States - Saturday 9th May 2015 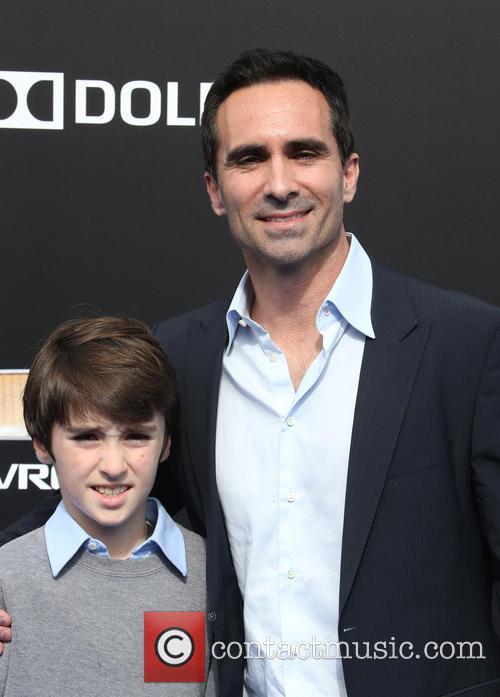 Bruce Wayne returns to Gotham after eight years in The Dark Knight Rises, his alias Batman nursing a sore reputation after the last film, The Dark Knight, where he assumed responsibility for the attorney Harvey Dent's crimes in order to protect Dent's name after he loses his life during The Joker's assault on the city. This time he intends to defend Gotham City from a new villain: the virtually indestructible Bane who, as discovered by Commissioner Gordon, is plotting the obliteration of the entire city from the inside.

It has been eight years since Harvey Dent was killed, during the Joker's killing spree. Billionaire Bruce Wayne accepted responsibility for Dent's death and left Gotham. The city has now recovered from the shocking events and is living in peace.

The teaser trailer for The Dark Knight Rises shows an injured James Gordon, one of the few police officers in Gotham who is not corrupt, lying in a hospital bed, asking for Batman's help.