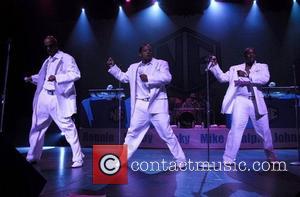 New Edition are planning a major 2012 reunion tour to prepare for their 30th anniversary celebrations.
The grown-up boy band, featuring Bobby Brown and Ronnie DeVoe, will be working on live dates, a book, movie and stage play as well as a new album next year (12) in a bid to have multiple products on the market in time for the 30th anniversary of the release of the group's first album Candy Girl in 2013.
DeVoe tells Billboard.com, "2012 is going to be an incredible year for us."
The reunited group will kick off 2012 with a four-day New Year's weekend run of concerts in Highland, California and then the sextet, which also features Johnny Gill and Ralph Tresvant, hope to begin work on their first album of new material since 1996's Home Again.