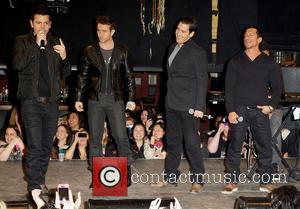 New Kids On The Block star Jonathan Knight has apologised after walking off stage during a concert in New York City on Thursday (04Apr13).

Knight took to the stage at Manhattan's iHeartRadio Theater alongside his bandmates, Donnie Wahlberg, Joey MCIntyre, Danny Wood and Jordan Knight, but left halfway through the hour-long set and did not return.

Reports suggest Knight was visibly out of sync with his bandmates, kept to the back of the stage, and even answered his cell phone during the performance.

The other bandmembers rallied around the singer, who has battled bouts of anxiety and panic attacks in the past, but when Knight was due to perform ballad Survive You, he laughed, attempted to sing and then stopped before exiting the stage, according to Billboard.com.

The remaining stars continued and joked that Knight had answered a call of nature and was stuck in the restroom, before continuing the set as a four-piece.